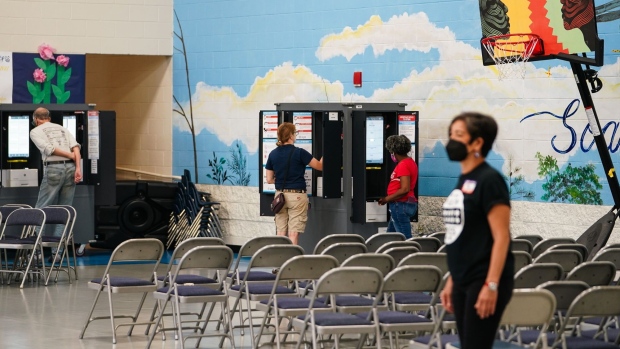 Voters cast ballots at a polling location in Atlanta, Georgia, US, on Tuesday, May 24, 2022. The latest test of Donald Trump's sway over Republican voters will be on display Tuesday night in Georgia's crucial primary race. , Bloomberg

(Bloomberg) -- Georgia headlines a spate of primaries across the South on Tuesday, featuring its Republican gubernatorial and secretary of state races that will test former President Donald Trump’s hold over the GOP.

Former US Senator David Perdue, who Trump recruited to challenge Republican Governor Brian Kemp after he refused to overturn Trump’s election defeat in the state, was trailing in polls despite efforts by the former president that include a rally in March and “tele-town hall” calls for him.

Perdue had a modest schedule of campaign events heading into Tuesday’s primary, while Kemp traveled the state with prominent Republicans unpopular with Trump, including former Vice President Mike Pence, who also refused to overturn the 2020 results.

Kemp’s already pivoted his focus to likely Democratic nominee Stacey Abrams in what would be a rematch of their hotly contested 2018 race.

In Georgia, Trump’s pick for US Senate GOP nominee, former football star Herschel Walker, appeared to be cruising to victory. In RealClearPolitics polling averages for the race before the primary, Walker was leading five competitors with 55.7 percentage points.

He would face Senator Raphael Warnock, who has no significant opposition in the Democratic primary. Warnock is the senior pastor of Ebenezer Baptist Church in Atlanta, where Martin Luther King Jr. once preached, and is defending the seat he won in a special election in 2021.

Trump has used the midterm primary season to flex his grip over the GOP, exact political revenge over this 2020 election loss and tease a 2024 White House bid. His backing helped “Hillbilly Elegy” author JD Vance mount a come-from-behind win in Ohio’s Republican Senate primary, but it couldn’t save US Representative Madison Cawthorn in North Carolina or allow celebrity physician Mehmet Oz to avoid a too-close-to-call Senate GOP contest in Pennsylvania.

While Republicans are expected to take control of the US House in November’s midterm elections amid skyrocketing inflation and Biden’s plummeting approval ratings, the fight for control of the Senate is competitive with concerns the GOP will nominate weaker candidates to face Democrats in key races.

There are also primaries on Tuesday in Arkansas, where former White House Press Secretary Sarah Huckabee Sanders is favored for governor, Minnesota and Alabama -- where US Representative Mo Brooks still hopes to prevail or reach a runoff in the state’s Republican US Senate primary even though Trump rescinded his endorsement.

Meanwhile, there are run-off races in Texas, including Attorney General Ken Paxton facing George P. Bush, son of former Florida Governor Jeb Bush. A defeat for Bush would effectively end the Bush political dynasty in Texas. Paxton has worked to overturn the 2020 election results as well.