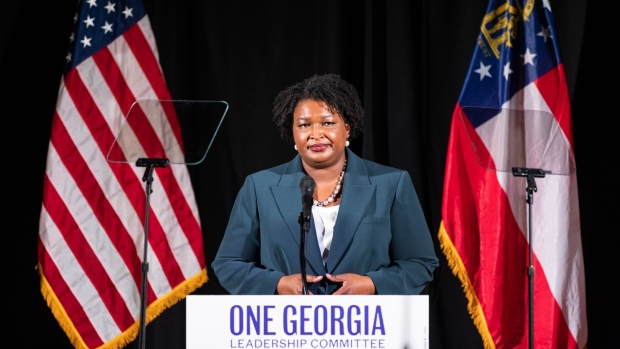 Stacey Abrams, Democratic gubernatorial candidate for Georgia, during a news conference on Georgia's economy in Atlanta, Georgia, US, on Tuesday, Aug. 9, 2022. Abrams highlighted her plans to create jobs, expand opportunity and grow Georgia’s economy — all without raising taxes. , Bloomberg

(Bloomberg) -- Georgia Democratic candidate for governor Stacey Abrams tested positive for Covid-19 on Wednesday, after she delivered a campaign speech on economic policy the previous evening.

Abrams, 48, has been vaccinated and received boosters and currently is in isolation at home with mild symptoms, according to her campaign.

“This morning, Stacey Abrams tested positive for Covid-19 during routine testing,” a campaign spokesman, Michael Holloman, said in a statement. “She tests daily and tested negative via PCR Monday and negative via rapid test yesterday before her ‘Georgia Thrives’ economic speech.” Abrams “looks forward to traveling across the state to meet Georgians as soon as possible,” he said.

After running unopposed for the Democratic nomination earlier this year, Abrams is facing off against the Republican incumbent Governor Brian Kemp in November’s general election. It’s a rematch of four years ago, when Kemp narrowly defeated Abrams, who then went on to gain national recognition as a voting rights activist.