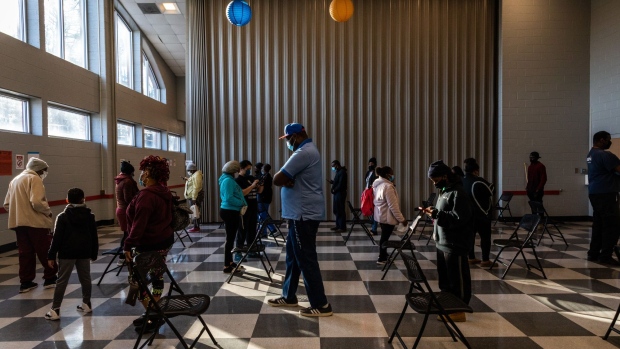 Voters stand in line to cast ballots at a polling location during the Senate runoff elections in Atlanta.. Photographer: Dustin Chambers/Bloomberg , Bloomberg

(Bloomberg) -- Georgia officials expect to certify the results of last week’s runoff election for two U.S. Senate seats by the time President-elect Joe Biden takes office, a person familiar with the process in the Secretary of State’s office said.

The two seats won by Democrats Raphael Warnock and Jon Ossoff had been held by Republicans David Perdue and Kelly Loeffler, who both conceded defeated following a Jan. 5 runoff.

Aides to Senate Majority Leader Mitch McConnell and Senate Minority Leader Chuck Schumer did not immediately answer how soon the two newly election Democrats could be seated in the chamber.

The official said 113 of its 159 counties so far have completed their certifications, and the anticipation is that the remaining counties will finish by the end of the Friday. The state then expects by Wednesday to itself certify the results -- a requirement for the lawmakers to be seated in Washington, said the official.

The twin wins will give the Democratic caucus 50 seats in the Senate, leaving President-elect Kamala Harris to cast any tie-breaking votes.