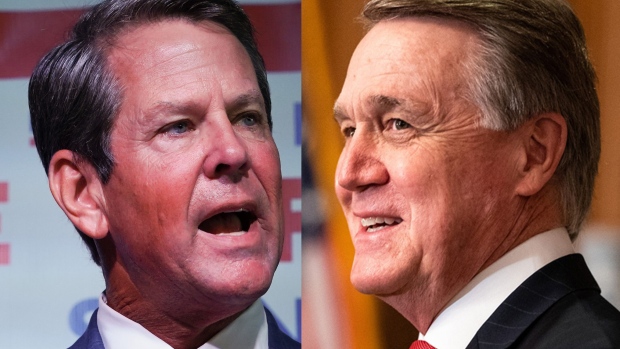 Former US Senator David Perdue, whom Trump tapped to oust incumbent Republican Governor Brian Kemp, has more than a 20 percentage point disadvantage in polls, in a race Trump once called a top priority. In the final week before the elections, Perdue only had a modest schedule of campaign events, while Kemp rushed around the state flanked by a who’s-who of Republicans unpopular with Trump, including former Vice President Mike Pence.

“He’s just not a very good candidate,” Charles Bullock, an emeritus professor of political science at the University of Georgia, said of Perdue, who lost in the 2020 Senate race. “I think he tried harder this year than in the Senate race, but I don’t think he really likes campaigning.”

In Georgia, what is on the ballot in some of the highest profile races is Trump’s stolen-election claim after the state delivered the White House to Biden and control of the US Senate to Democrats in 2020. The former president set out to decapitate Georgia’s Republican leadership over its failure to overturn Biden’s win, recruiting and endorsing challengers to three of the top four Republican office holders: Kemp, Secretary of State Brad Raffensperger and Attorney General Chris Carr. The fourth, Lieutenant Governor Geoff Duncan, who publicly blasted Trump’s conspiracy theories, isn’t running.

The state primary is another test of Trump’s influence in the GOP as he teases a run for the White House in 2024 after a month of primaries with mixed results for his high-profile endorsed candidates. Trump’s backing helped “Hillbilly Elegy” author JD Vance mount a come-from-behind win in Ohio’s Republican Senate primary, but it couldn’t save US Representative Madison Cawthorn in North Carolina or allow celebrity physician Mehmet Oz to avoid a too-close-to-call Senate GOP contest in Pennsylvania.

Even when Trump’s choices lost, the winners ran as supporters of the former president and his policies – meaning GOP voters were choosing Trumpism even if they rejected Trump’s preferred candidate.

“These candidates, in many respects, are arguing over varying degrees to which they support the former president,” said Republican strategist Ken Spain, who oversaw Republicans’ successful communication strategy in the 2010 midterms.

Kemp is 24.8 points ahead in the RealClear Politics polling average, at 55.8% to 31%, with three other candidates in the single digits. The latest poll, from Fox News last week, had him 32 percentage points ahead, with 60% of the vote. Kemp had advantages, including incumbency and money. As of May 10, Kemp’s campaign had raised $22.4 million and had a cash balance of $10.7 million. By comparison, Perdue’s campaign had raised $3.5 million and had $898,318 left.

Some of Trump’s 10 Georgia candidates who aren’t running unopposed will win: The secretary of state race, where Raffensperger is running against Representative Jody Hice, is far closer than the gubernatorial one and could go to a runoff. Raffensperger said in an exclusive interview earlier this month that his opponent is lying about how he handled Joe Biden’s 2020 win, and that there was no systemic fraud in the state’s elections that year.

A poll from the Atlanta Journal-Constitution in April found Raffensperger and Hice were neck and neck, at 28% and 26%, with 37% undecided.

Trump’s pick for Senate nominee, former University of Georgia football legend Herschel Walker, appears far ahead. In RCP polling averages for the US Senate race, Walker was leading five competitors for the Republican Party nomination with 63.6 percent of the vote.

And Perdue’s backers hold out hope, saying pollsters have been talking to the wrong people and that they see signs of an upset in a surge of GOP turnout in early voting.

There are also primaries on Tuesday in Arkansas, Minnesota and Alabama -- where US Representative Mo Brooks, who’s endorsement Trump rescinded, still hopes to prevail or reach a runoff in the state’s Republican US Senate primary. There are also run-off races in Texas, including Attorney General Ken Paxton facing George P. Bush, son of former Florida Governor Jeb Bush.

After a splashy debut in December, Perdue’s campaign never caught fire, despite its high-megawatt instigator.

When Perdue announced his candidacy in December, Kemp was widely believed to be in trouble. It was the first significant primary challenge to a sitting Georgia governor in modern history.  And an angry subset of the party was convinced that Kemp – who won a 2018 primary after Trump’s endorsement – had betrayed him by certifying Biden’s win and not calling a legislative session to overturn the results. Perdue argued those Republicans would never vote for Kemp in November and embraced Trump’s stolen-election mantra. One poll, taken hours after Perdue’s announcement, showed a tie.

Perdue pounded Trump’s support relentlessly, but Republicans did not flock to him. Even some allies went with Kemp, including Perdue’s former Senate chief of staff Derrick Dickey.

The Perdue campaign also “thought legislators would break for him and break early, that everybody would take their cue from the Trump endorsement and get behind him,” said Bullock. “But the legislators stayed with Kemp. It’s smart to stick with the sitting governor through the legislative session if you have anything you want.”

Perdue’s and Trump’s portrait of Kemp as insufficiently conservative is also a hard sell, said Republican consultant Brian Robinson. Kemp “is defined in the minds of voters. And voters are not particularly open to new interpretations of him that they don’t believe,” he said. “Part of the attack on him was that he was a RINO (Republican in name only) and not a true conservative. That’s a tall task.”

“On one issue after another he delivered on hot button topics for conservatives and people know that,” said Robinson. “It doesn’t mean Trump’s endorsement wasn’t important. But the lane to win in a Republican primary in Georgia is to be the most conservative and Brian Kemp has established a record on that.”