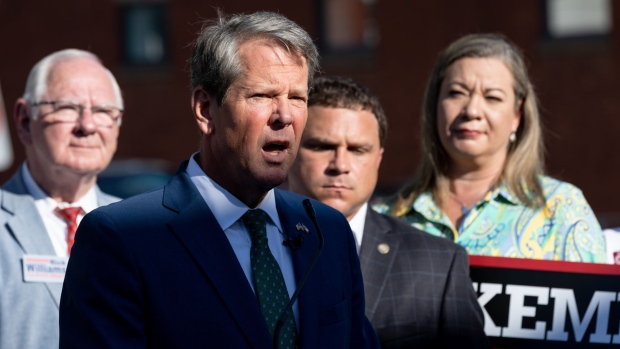 In a legal filing late Wednesday, Kemp’s attorneys revealed for the first time that the Republican governor didn’t voluntarily testify to a special grand jury by video in late July as planned. Instead, they said, Kemp was subpoenaed on Aug. 4 and had been scheduled to appear before the grand jury in person Thursday, a day after former Trump attorney Rudy Giuliani showed up in Atlanta to testify.

But now Kemp’s appearance is on hold, awaiting an Aug. 25 hearing on the governor’s motion to quash the subpoena.

In the filing, Kemp’s legal team said Willis’s office had “repeatedly and explicitly tethered its desire to obtain information from the governor to the timing of the November election,” and had rebuffed requests to have Kemp testify either far in advance of the upcoming gubernatorial election or after it. Kemp faces Democratic challenger Stacey Abrams on Nov. 8.

Although Willis, a Democrat, has yet to reply, she sent a strongly worded email to Kemp attorney Brian McEvoy on July 20, the day the deal for video testimony on July 25 collapsed. The email is an exhibit in Kemp’s motion to quash.

“My special counsel in an effort to be a gentleman and an officer of the court has been far too polite,” she wrote. “This is NOT a politically motivated investigation. It is a criminal investigation.”

“You repeatedly referring to it as a politically motivated investigation only proves you have become very comfortable being dishonest.”

Willis is looking at a number of issues surrounding the efforts of Trump and his legal team to nullify the 2020 election results, including pressuring public officials, spreading misinformation and submitting a false slate of Republican electors to the Electoral College and the National Archives.

The filing isn’t the first time Willis has been accused of playing politics. Burt Jones, a Republican candidate for lieutenant governor who was one of the fake electors and a target of the investigation, got her office disqualified from investigating him because Willis had headlined a fundraiser during the primary for the Democrat who won and is now Jones’s opponent.

Kemp’s motion said he agreed to a voluntary interview in April 2021 but that it never happened. At least two things have changed since then. The first was a September Trump rally in Commerce in which the former president revealed for the first time that he had called Kemp to persuade him to help overturn the election results. And Willis got permission to convene a special purpose grand jury in January, which allowed the subpoenaing of witnesses.

The filing referenced dozens of communications between McEvoy and a changing cast of assistant district attorneys. Eventually, McEvoy had an agreement to allow Kemp to testify voluntarily by video with a lawyer next to him on July 25, and a deal that McEvoy would be told in advance what questions would be asked. The governor’s office provided over 40 bankers’ boxes of documents in response to a subpoena. McEvoy was also pushing Willis to control leaks.

In her July 20 email, Willis said she never allows advance notice of questions during criminal matters, denied any leaks and said the Kemp team had caused the delays. She said the offer to allow Kemp to testify by video and with a lawyer present “is now off the table.”

“Your client is a mere witness that needs to come and tell the truth,” Willis wrote. “That is all we have ever asked of the governor.”