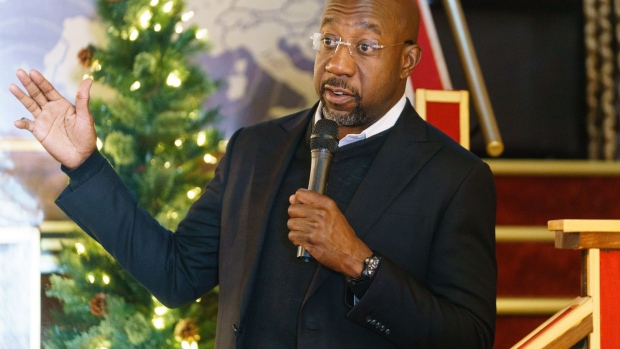 (Bloomberg) -- Democrat Raphael Warnock and Republican Herschel Walker are scrambling to get their supporters back to the polls one more time and find any Georgia voters still left to persuade with a little more than a week to go before the state’s Dec. 6 US Senate runoff.

Democratic and Republican officials and their allies are spending millions to bombard radio and TV with ads while politicians and activists are flooding the state. Newly re-elected Republican Governor Brian Kemp is putting his political muscle behind Walker and former President Barack Obama will campaign for Warnock, the incumbent in the race.

But unlike the frenzy that surrounded the runoff 23 months ago that put Warnock in the Senate, both campaigns are operating without a key motivator for their voters. Their contest won’t determine control of the US Senate. That was settled on Election Day when Democrats secured 50 seats.

That’s a major problem for both Warnock and Walker, so the parties are pouring in money and surrogates.

Even prior to the Nov. 8 election, the Warnock-Walker contest was the most expensive race of the year, exceeding $245 million in ad spending, according to AdImpact, which tracks political media expenditures.

Warnock and allied groups are spending $37.5 million in advertising in the runoff compared to $20.9 million by Walker and the GOP super-PACs supporting him according to AdImpact. The totals, current through Thursday, include spending on ads that have already run and those booked in the weeks ahead.

Warnock’s campaign is the biggest spender at $17.6 million, followed by Georgia Honor, a super-PAC funded by the Democratic leadership-aligned Senate Majority PAC, at $14.7 million. The Senate Leadership Fund, which has ties to Senator Mitch McConnell, is spending $16 million on the runoff, followed by Walker’s campaign at $6.6 million.

Warnock bested Walker in the Nov. 8 general election by just less than a percentage point, but he fell short of 50% of the vote, triggering the runoff.

Generating voter enthusiasm for the runoff is a challenge for both candidates, but it may be bigger for Walker. In the November election, he underperformed Kemp by more than 200,000 votes, an indicator that there were a lot of Republicans turned off by Walker.

Dent and former Georgia GOP representative Jack Kingston said the governor is a key asset for the Walker campaign.

“Kemp has not only a good image and message, but he has a good ground game,” Kingston said. “He wants a Republican senator he can go to. And it’d be a big win if Brian Kemp would be part of recapturing the seat. So, he’s got plenty motivation.”

On the other side of the ledger, Obama is scheduled to hold a Dec. 1, rally for Warnock in Atlanta. He also campaigned for the senator on Oct. 28, days before the general election.

“He does still have a lot of magic in terms of the Democratic voters,” Kingston said of Obama.

Walker’s most famous backer, former President Donald Trump, has lent his name to some Walker fundraising efforts, but so far there have been no plans announced for him to campaign in the state. In the midterm election,Trump’s attacks on mail-in voting and his unpopularity with independent voters hampered some candidates.

Warnock has avoided questions about whether President Joe Biden, who suffers from low approval ratings, would be asked to campaign for him in Georgia. Biden has said he would do “whatever he wants me to do for him.”

Georgia runoffs have traditionally favored Republicans. Of 11 statewide runoffs in Georgia since 1992, Republicans won eight. Their voters have long been seen as more likely to turn out again than Democrats.

The only independent poll released since the Nov. 8 general election, conducted by the AARP, shows Warnock leading Walker among likely voters by four points, 51% to 47%, a result within the margin of error.

In the runoff campaign, Warnock has been emphasizing his experience and contrasting that with Walker’s. Last week, he rallied in the former football star’s hometown of Wrightsville with Walker’s high school coach, who said his former player wasn’t “ready” to serve in the Senate. Warnock also mentions his opponent’s controversies, including allegations of domestic violence and that he paid for abortions for two women even though he opposes abortion rights.

As he did in the general election Walker continues to tie Warnock to Biden and drive home his conservative views on family, opposition to transgender athletes competing in women’s sports and criticism of how race is taught in schools.

“What’s going on in Georgia is exactly what’s going on around the country,” Dent said. “We’ve broken down into two tribes. We have Democrats and Republicans, and we just want our team to win, and no matter how bad our nominee may be, they’re better than the nominee of the other party.”