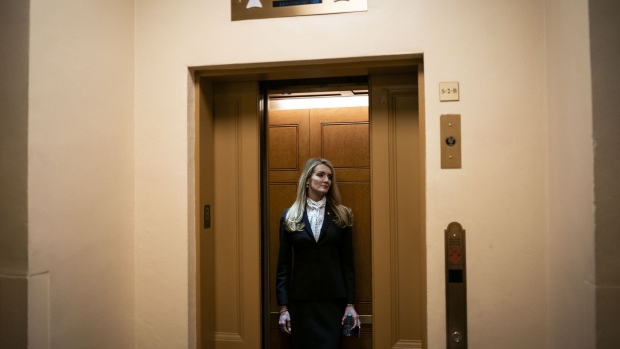 Kelly Loeffler arrives for a vote at the U.S. Capitol in March 23. Photographer: Al Drago/Bloomberg , Bloomberg

(Bloomberg) -- Senator Kelly Loeffler said Wednesday she and her husband are liquidating their investment portfolio following criticism of their sales and purchases of millions of dollars worth of stocks amid the coronavirus outbreak.

The Georgia Republican, who is running to keep her Senate seat in a Nov. 3 nonpartisan primary, announced in a Wall Street Journal opinion-page article that the couple’s stock holdings will be converted to mutual funds and exchange-traded funds to be controlled by third-party advisers.

She and her husband, Jeffrey Sprecher, the chief executive of Intercontinental Exchange, parent company of the New York Stock Exchange, have a net worth estimated at more than $500 billion.

“While the American people are enduring the impact of Covid-19, I have become a top target of baseless attacks from political adversaries and the media,” wrote Loeffler in the article headlined “I Never Traded on Confidential Coronavirus Information.”

In an effort to move on past “these distractions,” said Loeffler, she and her husband’s holdings would be converted.

Loeffler was appointed in December by Georgia Governor Brian Kemp to finish the term of Republican Senator Johnny Isakson, who retired.

Loeffler has been criticized about her sales and purchases of stocks following government briefings to Congress on the virus. She and her husband sold $46,027 worth of stock in an online travel company in the day leading up to President Donald Trump’s announcement of a ban on most European travel to the U.S. They had purchased that stock just days earlier.

Some stock sales by another senator, Richard Burr, a North Carolina Republican, have prompted a government inquiry.

Loeffler is also quoted as saying she and her husband put the arrangement in place to insulate themselves “from these sorts of unfounded accusations.”

She faces several challengers in Georgia’s Nov. 3 primary for her Senate seat from Representative Doug Collins, a fellow Republican, as well as three Democrats, a Libertarian and an independent.

If no candidate gets more than 50% of the vote, the top two will be in a runoff likely in January.

Collins has raised the controversy over Loeffler’s stock trades in his campaign. His campaign spokesman Dan McLagan said in an email Wednesday regarding her move, “This is essentially a guilty plea, and Georgians who just saw their retirement plans crater while she profited are not going to agree to the plea deal.”