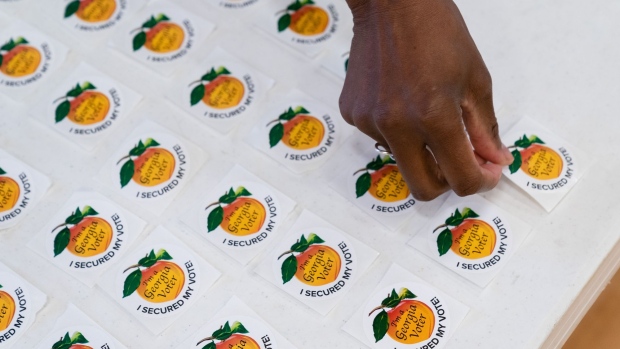 An election worker replaces a voting sticker at a polling location during the runoff election in Atlanta, Georgia, US, on Tuesday, Dec. 6, 2022. Georgia voters Tuesday will decide whether to send Senator Warnock, a Democratic incumbent, back to Washington for a full six-year term or instead elect Republican Walker in the second consecutive runoff election for the seat in less than two years. , Bloomberg

(Bloomberg) -- Campaigns have been pouring money into Georgia politics since Democrats’ surprise victories in the once reliably Republican state beginning in 2020, and those figures are only expected to rise.

“The spending in Georgia is going to be astronomical,” said veteran Democratic strategist James Carville. “It’s a competitive state, and it’s huge.”

Migration patterns and demographic changes have turned Georgia from a Republican stronghold to one that’s becoming more Democratic by the year. It will be key to both parties’ electoral strategies in 2024, Carville said.

Spending on the current US Senate runoff, alone, has already dwarfed the money spent in Georgia on the 2020 presidential election.

Democrat Raphael Warnock and allied groups are spending $59.4 million in advertising in Tuesday’s runoff compared to $28.5 million by Republican Herschel Walker and the GOP super-PACs supporting him, according to AdImpact.

In the last presidential election, campaigns, parties and outside groups combined to spend $64.4 million in Georgia, with Republicans accounting for $42.2 million of that amount, according to AdImpact. It ranked seventh among battleground states, behind Florida, Pennsylvania, North Carolina, Michigan, Arizona and Wisconsin.

But the Peach State has since solidified its place as a quintessential battleground state with its competitive and high-stakes elections, including Tuesday’s Warnock-Walker rematch that will determine the extent of Democratic control of the chamber.

Florida, meanwhile, has appeared to become more reliably Republican with Donald Trump’s victories in 2016 and 2020 and Governor Ron DeSantis’s overwhelming re-election in November, while Georgia looks to be as competitive as the other battleground states, Carville said.