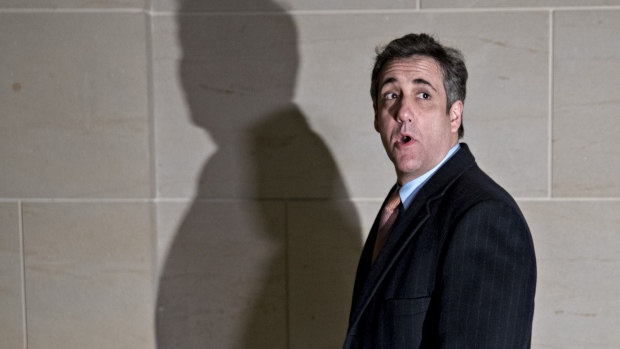 In a letter to U.S. Attorney General William Barr on Tuesday, lawyers for Giorgi Rtskhiladze demanded a retraction to a footnote in Mueller’s 448-page report on Russian interference in the 2016 presidential election.

The letter says the footnote includes only part of Rtskhiladze’s text exchange with then-Trump personal attorney Michael Cohen, failing to provide the full context. The FBI and Mueller’s team “spliced the dialogue to produce the ugly insinuations and allegations of Footnote 112 to attract publicity -- all while impugning Mr. Rtskhiladze’s character,” according to his attorney, A. Scott Bolden.

Bolden’s letter provides a fuller version of the texts. While adding more information, the messages probably won’t settle speculation about possible tapes. Rtskhiladze, who had business dealings with Trump, said in an interview Wednesday that his texts had been misinterpreted to mean he’d seen and destroyed compromising tapes of Trump, when he was only conveying a rumor.

Rtskhiladze said he’s agreed to voluntarily testify before the House Intelligence Committee in the coming weeks after receiving a written request from the committee’s chairman, Democratic Representative Adam Schiff.

The footnote disclosed part of a text from Rtskhiladze to Cohen on Oct. 30, 2016, and, after Mueller’s report was released, prompted more questions than answers.

In his texts, Rtskhiladze tells Cohen: “Stopped flow of some tapes from Russia.” But in the footnote, Mueller dropped “some” from the text, which is a “crucial” word because “it establishes the fact that Mr. Rtskhiladze had no knowledge of the tapes’ content,” according to the letter to Barr. Mueller didn’t disclose the rest of the text exchange, which shows Rtskhiladze didn’t have direct knowledge of the rumor involving the tapes, the letter says.

“It’s not something I took action on,” Rtskhiladze said in the interview. “It was not a fact, just a stupid rumor.”

Cohen then asks, “Tapes of what?”

Rtskhiladze responds, “Not sure of the content but person in Moscow was bragging had tapes from Russia trip. Will try to dial you tomorrow but wanted to be aware. I’m sure it’s not a big deal but there are lots of stupid people.”

Cohen says, “You have no idea.”

Rtskhiladze responds, “I do trust me.”

Rtskhiladze said the full exchange of his texts with Cohen shows he was only communicating a rumor a friend had overheard at a Moscow party. He said his friend, whom he declined to identify, called to alert him about the rumor because of Rtskhiladze’s business dealings with Trump. Rtskhiladze said he passed along the identity of his friend to Mueller.

In 2012, the Trump Organization announced plans to build a $250 million tower in the Georgian Black Sea town of Batumi with the Silk Road Group, which paid him a $1 million licensing fee. Rtskhiladze, a partner of the group’s U.S. affiliate, had helped broker that deal. Plans for the tower were on hold until Trump announced he was pulling out of the project in January 2017 just before he entered the White House.

The texts between Rtskhiladze and Cohen came a few weeks after an Access Hollywood video was released showing Trump talking about kissing and groping women without their consent, leading to speculation there were more compromising tapes to emerge. But it was before a dossier of unverified allegations about Trump and his campaign, compiled by ex-British spy Christopher Steele, was published.

The most titillating allegation in the Steele dossier was that Trump hired prostitutes to perform a sexual act during a 2013 visit to Moscow. Trump has repeatedly denied the allegation. Still, the possible existence of compromising tapes of Trump, while he was in Moscow to attend the Miss Universe Pageant, has been the subject of fierce speculation ever since Mueller began his investigation. No tapes have emerged.

Rtskhiladze said he provided his story to Mueller’s prosecutors, meeting with them twice and appearing before the special counsel’s grand jury for more than 17 hours in total.

Still, Mueller’s report wrongly identified Rtskhiladze as Russian, the letter says. In fact, he is from the Republic of Georgia but moved in 1991 to the U.S. and became a U.S. citizen in 2017. “The mere suggestion that Mr. Rtskhiladze is cavorting with Russian associates belittles his personal integrity and identity, tarnishes his reputation and impedes his ability to do business in his native country,” the letter said. Rtskhiladze said he has nothing against Russians.

“Russia is a great culture,” he said. “I’m just not Russian.”

To contact the reporters on this story: Stephanie Baker in London at stebaker@bloomberg.net;Helena Bedwell in Tbilisi at hbedwell@bloomberg.net