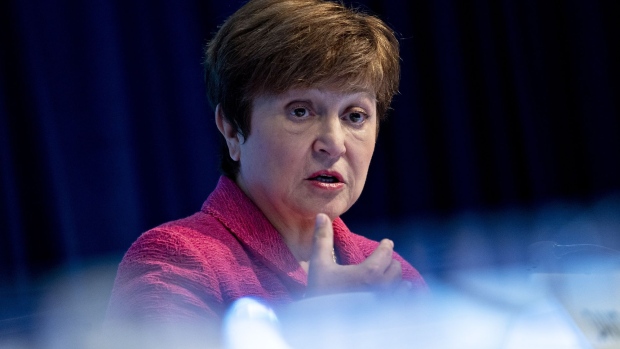 (Bloomberg) -- IMF Managing Director Kristalina Georgieva this week gave the lender’s board a more detailed defense against accusations that she improperly influenced a report in China’s favor in her previous job at the World Bank.

In a three-page letter to the head of the board’s ethics committee dated Sept. 21 and obtained by Bloomberg News, Georgieva -- who at the time was the World Bank’s chief executive officer -- said she was surprised by law firm WilmerHale’s conclusion in a Sept. 15 audit report that she played a “key role” in changes related to China’s ranking in the Doing Business 2018 report.

“This is simply untrue,” Georgieva wrote. “The premise on which this accusation is built -- that I pressured staff to inflate China’s Doing Business 2018 ranking because of the Bank’s capital increase -- is wrong and based on fundamental misunderstandings of my role as CEO of the World Bank, the work on capital increase, my involvement in Doing Business 2018, and how I carry myself personally and professionally.”

The report has put Georgieva, 68, at risk of seeing her authority undermined just weeks before an annual meeting of global finance chiefs. The U.S. Treasury sees the accusations as serious and is “analyzing the report,” while Republican lawmakers have called for Treasury to probe the allegations.

The IMF previously pledged a “thorough, objective, and timely review” of the allegations against Georgieva. Last week, after the WilmerHale audit was released, Georgieva said she disagreed with the findings and told fund staff at a town hall that she asked staff to double-check or triple-check data, but never change its ultimate message.

The IMF press office declined to comment on the letter. WilmerHale didn’t immediately respond to a request for comment.

In the letter, Georgieva said her involvement in reviewing the Doing Business report was part of her role overseeing the department that produced it.

She said she “asked the team to thoroughly check every data point and judgment applied to the rankings to make sure that we were on solid ground. I also asked the team to address complaints of many members that their reforms did not result in higher rankings.”

Georgieva said she learned later on that the Doing Business team “decided to make some changes to the China data, which affected its ranking.” Ultimately, China’s ranking stayed the same as the prior year’s instead of falling, though it didn’t increase, Georgieva wrote.

Georgieva wrote in the letter that the audit contains “many other assertions, innuendos and presumptions” that are untrue.