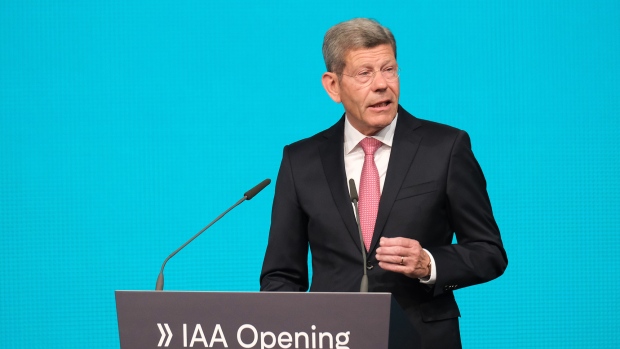 Bernhard Mattes, head of the Association of German Auto Industry (VDA), speaks at the opening event of the IAA 2019 Frankfurt Auto Show in Frankfurt am Main on Sept. 12. , Photographer: Sean Gallup/Getty Images

(Bloomberg) -- Bernhard Mattes, the head of Germany’s auto lobby group VDA, resigned unexpectedly in the middle of the Frankfurt motor show, the showcase event the group hosts every two years.

Mattes will leave his post as president by the end of the year, the VDA said Thursday in a statement. The board said it received his resignation earlier in the day, providing no further details.

His exit comes at a time of transition for the auto industry, as well as the Frankfurt event. More than 30 brands, including Toyota, Volvo and Ferrari, skipped having a presence, and even German stalwart BMW AG scaled back. Meanwhile, climate protesters have stepped up criticism of the industry’s track record on greenhouse gas emissions.

The newspaper Sueddeutsche Zeitung reported that Volkswagen AG was dissatisfied with the VDA chief and was already searching for a successor. Industry sources told the newspaper that managers sought more lobbying influence in Berlin, a growing concern as politicians step up climate-change measures.

Still, the news came as a shock, on the event’s official opening day after press events earlier in the week.

“We have noted with regret the surprising announcement,” said Elmar Degenhart, a VDA board member and also chief executive officer of Continental AG, one the world’s biggest auto suppliers.

Mattes has been president of the group for just over a year, after a career at BMW AG and Ford Motor Co. His tenure was marked by a downturn in German car sales that started with the introduction of new emissions testing but has continued well into 2019. German car sales were roughly flat in the first six months of the year, according to data from the European Automobile Manufacturers Association.

Mattes took over during a time of upheaval, Degenhart said in an emailed statement. “He tried calmly, factually and purposefully to give the association a unified voice at a time when the economy, society and politics place extremely high demands on our industry.”

To contact the reporter on this story: Oliver Sachgau in Munich at osachgau@bloomberg.net

To contact the editor responsible for this story: Anthony Palazzo at apalazzo@bloomberg.net