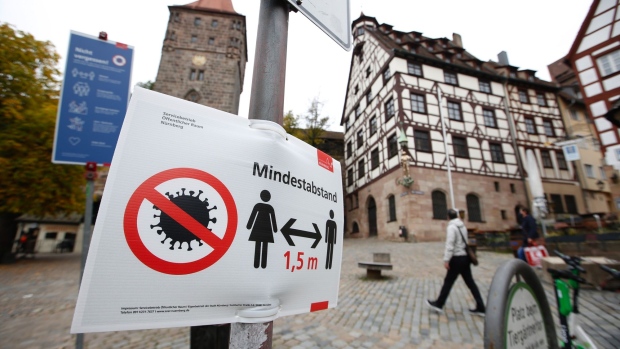 (Bloomberg) -- German businesses are increasingly optimistic that economic momentum will pick up this year, despite extended lockdowns to combat new variants of the virus and a slow start to vaccinations.

The Ifo Institute’s gauge of expectations for the next six months rose to 94.2 in February from 91.5 in January, beating estimates in a Bloomberg survey. The business climate index also gained, and companies were even slightly more upbeat about their present situation.

The German economy narrowly averted a contraction in the fourth quarter but with shops and restaurants still closed it’s set to shrink at the start of 2021.

Chancellor Angela Merkel’s government has warned that the spread of the coronavirus needs to slow further before Germany can consider loosening restrictions.

The manufacturing sector is the key source of resilience. Bundesbank President Jens Weidmann told newspaper Augsburger Allgemeine in an interview earlier this month that robust industry was one reason why the first-quarter setback shouldn’t be too big.

”It’s really a divided economy,” Ifo President Clemens Fuest said in an interview with Bloomberg Television, with manufacturing strong and retail a source of weakness. The slow vaccine rollout “will hold back the economy” and “more needs to be done.”

Even so, signs are mounting that manufacturers are now being hamstrung by supply bottlenecks, including a shortage of shipping containers for sea freight and semiconductors.

Delivery delays rose to near record levels in February, pushing input costs to the highest in nearly a decade, according to purchasing managers survey data.

Automaker Daimler AG said that it’ll recover production lost due to chips being in short supply over the course of the year, but cautioned that the situation remains volatile.