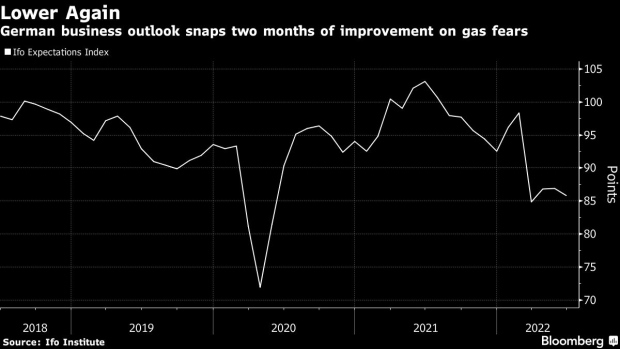 An employee monitors the production line at the Gerresheimer AG medical glassware factory in Buende, Germany, on Tuesday, Aug. 11, 2020. Gerresheimer has built up capacity and most of its factories are operating around the clock as the company holds talks with pharma companies, working on a coronavirus vaccine. , Bloomberg

A gauge of expectations by the Munich-based Ifo Institute fell to 85.8 in June from 86.9 in May. It had inched higher in the previous two months as the economy overcame the initial shock from Russia’s invasion of Ukraine and economists had predicted that trend to continue. An index of current conditions edged lower.

The data add to concern over the economic outlook in Europe’s largest economy a day after the government raised Germany’s natural-gas risk level to the second-highest “alarm” phase over the unprecedented prospect of power outages as Russia cuts supplies.

Germany’s economy is growing at the euro area’s slowest pace as post-lockdown momentum drains away, surveys of purchasing managers by S&P Global showed this week.

Consumers and companies are being squeezed by a record increase in prices, with German inflation hitting 8.7% last month. The European Central Bank has committed to raising interest rates in July and September, joining peers like the Bank of England and the Federal Reserve who’ve already increased borrowing costs several times.

Economists have warned of a recession in Germany if gas shortages were to become a reality and manufacturers -- on which the country relies to a greater extent than its neighbors to drive growth -- would have to curtail production.