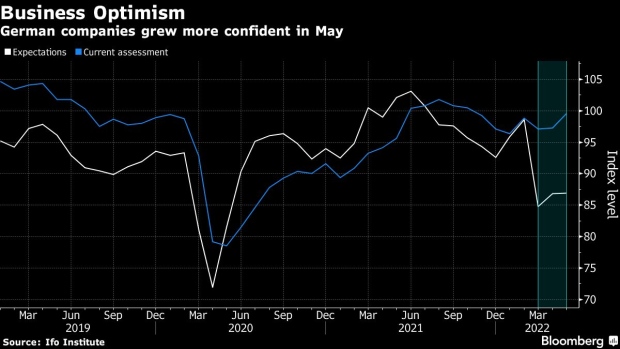 (Bloomberg) -- German business confidence edged higher as companies continued to navigate the fallout from the war in Ukraine and renewed supply-chain disruptions.

A gauge of expectations by the Munich-base Ifo Institute rose to 86.9 in May from a revised 86.8 in April, though it remained below its long-term average. Economists had predicted a slight decline. An index of current conditions also increased.

“The German economy has proven itself resilient in the face of inflation concerns, material bottlenecks, and the war in Ukraine,” Ifo President Clemens Fuest said Monday in a statement. “There are currently no observable signs of a recession.”

Businesses and households are facing surging energy costs and uncertainty about the future supply of Russian fossil fuels as the Ukraine conflict persists. What’s more, there are fresh logistical strains -- caused both by the fighting and the sanctions response, as well as new pandemic restrictions in China.

Policy makers have aired concern that the economy is facing stagflation, with little growth and steep price increases. German Finance Minister Christian Lindner has said the threat mustn’t be underestimated, and stock markets have dropped as investors digest the growing headwinds.

The European Commission last week cut its 2022 growth projection for the euro area to 2.7%, while warning that disruptions to Russian natural-gas flows would bring the pandemic recovery almost to a halt. Other studies have suggested that scenario would trigger a recession in Germany, which has a high dependence on imported gas.