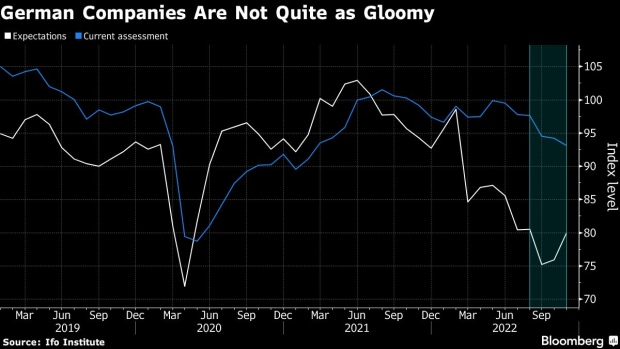 (Bloomberg) -- Germany’s business outlook rose from historically low levels as the risk of energy shortages this winter receded and the government in Berlin prepares wide-ranging measures to shield households and businesses from surging costs.

A gauge of expectations released Thursday by the Ifo institute improved for a second month, rising to 80 from a revised 75.9 in October. That was better than the 77 median estimate in a Bloomberg poll. A measure of current conditions slipped.

Unusually warm autumn weather and gas-storage facilities that are almost at capacity have lowered the likelihood that German companies will face energy cuts in the coming months. At the same time, Chancellor Olaf Scholz’s government is preparing to spend more than 50 billion euros ($51.6 billion) to subsidize gas and electricity, mitigating the hit to incomes from the highest inflation since the creation of the euro.

“Sentiment in the German economy has improved,” Ifo President Clemens Fuest said in a statement. “While companies were somewhat less satisfied with their current business, pessimism regarding the coming months reduced sharply. The recession could prove less severe than many had expected.”

The Ifo numbers, however, remain depressed as Germany braces for a recession due to the fallout from Russia’s war in Ukraine. The Kremlin’s decision to curb natural-gas shipments to Europe’s largest economy is weighing on consumers and companies alike while raising questions about the country’s competitiveness.

Surveys of purchasing managers on Wednesday signaled that German economic activity is receding, though conditions didn’t deteriorate from last month as economists had predicted. The OECD warned Tuesday that output will probably contract by 0.3% next year, compared with 0.5% growth for the euro area.