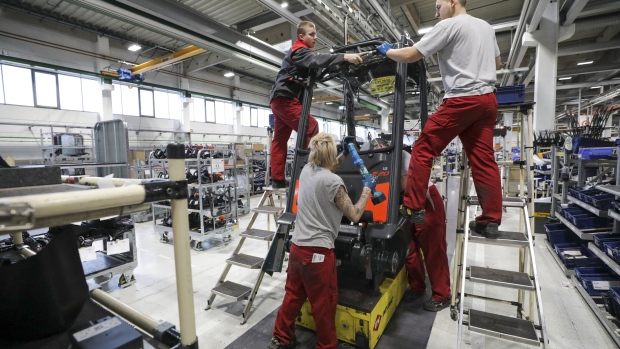 Employees fit a windshield to the cabin of a Linde H 20-35 forklift truck at the Linde Material Handling GmbH factory, a unit of Kion Group AG, in Aschaffenburg, Germany, on Tuesday, Nov. 19, 2019. Companies operating in the U.K. fear that if Britain crashes out of the European Union without an agreement it could create shortages and they are stockpiling goods, feeding demand for Kion's forklift trucks, according to Chief Executive Officer Gordon Riske. , Bloomberg

Unemployment in Europe’s largest economy fell by 39,000, more than economists estimated. That pushed the jobless rate down to 5.4%.

“Joblessness and underemployment are falling strongly, employment and firms’ demand for new personnel are rising and furloughs are receding,” Federal Labor Agency chief Detlef Scheele said in a statement. “The impact of the coronavirus crisis on the labor market is still visible but is getting smaller.”

German economic growth probably accelerated to 2.2% in the third quarter, bolstered by consumer spending following the end of most pandemic curbs. Yet risks to the outlook have increased.

German businesses have come under increasing pressure from the squeeze on supplies that’s leading to soaring costs and is set to delay the country’s recovery. The government in Berlin cut its growth outlook for 2021 to 2.6% this week, compared to an earlier forecast of 3.5%, while raising next year’s estimate.

Imported inflation is running at nearly 18%, the fastest pace in three decades, consumers are seeing price growth approaching 5%. The European Central Bank insists the spike is temporary, with wage negotiations showing no signs so far that salaries will rise more strongly because of higher costs.

Rising coronavirus infections pose another risk to the economy if they deter consumers from going out. Services firms such as restaurants are already reporting a slowdown in activity, partly because the initial reopening boom after the lifting of Covid-19 restrictions is waning.

The slowdown in the economy is happening against the backdrop of coalition talks in Berlin. Finance Minister Olaf Scholz, who led his Social Democrats to victory in last month’s election, is aiming be confirmed as chancellor in early December at the head of a government with the Greens and the business-friendly FDP.