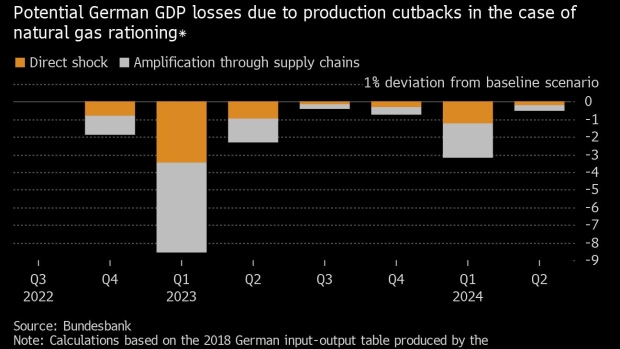 Pipework at the Falkenhagen Power-to-Gas Pilot Plant operated by Uniper NV in Falkenhagen, Germany, on Monday, May 2, 2022. The pilot plant developed by Uniper, which posted a quarterly loss as it opted to keep natural gas in storage to sell later at higher prices, converts wind power into hydrogen and synthetic methane. , Bloomberg

(Bloomberg) -- Germany’s cabinet rushed through legislation allowing it to rescue struggling energy companies as Russia’s squeeze on gas supplies rips through the industry.

Uniper SE, whose business depends on cheap Russian gas, is set to be the first to receive government support. Officials said on Monday the company needed as much as 9 billion euros ($9.3 billion) -- about twice its market value.

The legislation enables the state to offer bailout packages including taking stakes and also includes a mechanism to pass on part of the surging cost of gas to consumers, a government official said earlier on Tuesday. The cabinet approved the bill and it will go to parliament later this week.

Economy Minister Robert Habeck has said the crisis in the energy industry risks triggering a Lehman Brothers moment, a domino effect that could collapse the market. Russia has already curbed its gas flows to Germany and officials are bracing for more cuts that threaten the fabric of Europe’s biggest economy.

“We will do everything to keep up the basic supply in the coming winter and to keep the energy markets running as long as possible, despite rising prices and increasing risks,” he said.

Ministers are racing to get the measures in place before a key pipeline is shut down for maintenance on July 11. Berlin fears Moscow may never turn it back on after the work.

German officials are still wrestling over how the massive cost of surging gas prices to the industry will now be shared between companies and taxpayers. The government needs to weigh up the threat that any extra levy will spur inflation and voter unrest, but it also wants to use measures at its disposal to encourage consumers to use less gas. Habeck has signaled that higher energy prices are on the way to motivate users to be more energy-efficient.

While Uniper represents the most urgent concern, the broader economy is also in peril as the government is trying to contain the fallout for consumers and industry. Plans have been drafted for rationing, with Germany’s vast industry poised to suffer shortages.

Shares in Uniper rose as much as 11% on Tuesday after losing more than a quarter of their value on Monday. The stock then gave up those gains to trade little changed.

Uniper declined to comment. The company said last week it was in talks with the government to secure liquidity. Analysts estimate that curbed Russian flows are costing the utility 30 million euros a day.