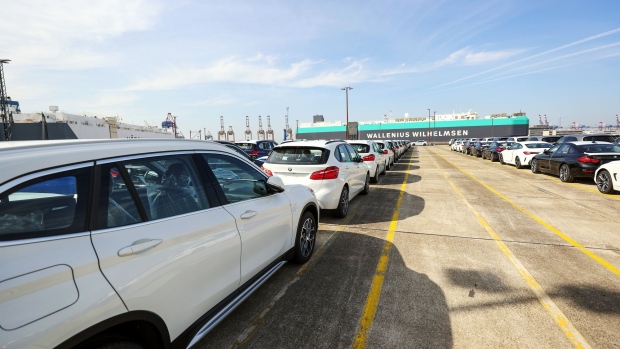 New Bayerische Motoren Werke AG (BMW) automobiles sit on the dock near a Wallenius Wilhelmsen ASA roll-on roll-off vehicle carrier at the BLG Logistics Group AG terminal at the Port of Bremerhaven in Bremerhaven, Germany, on Tuesday, Sept. 15, 2020. Germany expects the blow from the coronavirus crisis to be less severe than feared, as the country reduces its traditional reliance on exports. Photographer: Alex Kraus/Bloomberg , Bloomberg

The VDA supports both sides abolishing tariffs entirely and acknowledges that “Europe must make its contribution as well,” Mueller said days after former Vice President Joe Biden defeated Trump. This week, the EU started imposing tariffs on $4 billion of U.S. goods in a tit-for-tat escalation of a fight over illegal aid to aircraft manufacturers Boeing Co. and Airbus SE.

Germany’s auto imports have routinely come under fire during Trump’s presidency, though he hasn’t followed through on threats to target them with tariffs. Volkswagen AG, BMW AG and Daimler AG pacified the White House with pledges to boost investment at their U.S. factories and made the case that levies would hurt their networks of American car dealers.

Mueller, a former lawmaker and utilities lobbyist, called separately for an “action plan” to safeguard Germany’s industrial competitiveness. She said the country is falling behind due to high energy and labor costs and its complex bureaucracy and said Europe isn’t building electric-car charging stations quickly enough.