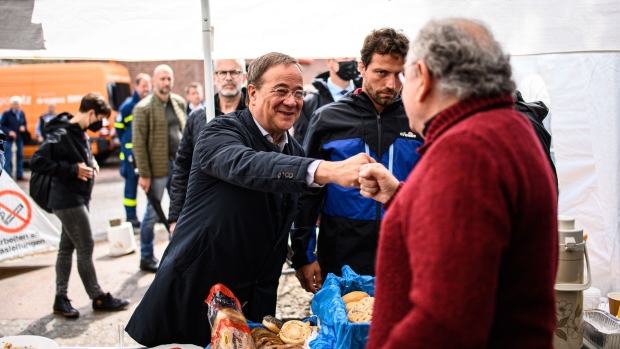 STOLBERG, GERMANY - AUGUST 03: Armin Laschet, premier of North Rhine-Westphalia and chancellor candidate of the German Christian Democrats (CDU), speaks with locals affected by flash floods on August 3, 2021 in Stolberg, Germany. Stolberg is one of dozens of towns and villages in western Germany hit by catastrophic floods in mid-June that left at least 170 people dead and another approximately 70 still missing. (Photo by Lukas Schulze - Pool / Getty Images) , Getty Images

(Bloomberg) -- The embattled front-runner to succeed Angela Merkel as German leader has postponed the start of his election campaign to deal with the aftermath of the floods that hit his home region last month.

Armin Laschet, the chancellor candidate of Merkel’s CDU/CSU alliance, was due to formally begin campaigning on Thursday with a tour starting in Frankfurt. Although his conservative bloc has maintained its lead in polls ahead of the Sept. 26 national vote, its advantage over the second-placed Greens has narrowed amid criticism of his response to the disaster.

“Dealing with the flood catastrophe is a top priority for Armin Laschet, and he will continue to devote his full attention to it,” Hero Warrings, the CDU spokesman, said Wednesday in an emailed statement.

Premiers of Germany’s 16 states and federal officials will meet next Tuesday to try to accelerate the process of getting aid to the affected regions, he added.

The devastating flood damage in Laschet’s home state of North Rhine-Westphalia and neighboring Rhineland-Palatinate has shifted the dynamic in the election campaign.

Authorities have looked ill-prepared and climate concerns have been forced back to the top of the public agenda, potentially providing an opening for the Green party.

During a tour of flood-hit areas on Monday, some citizens mounted vocal attacks on Laschet’s regional government for not publishing weather warnings earlier, and for the slow pace of recovery measures, according to local media reports.

Last week, the 60-year-old also came under fire after chuckling on camera as the German president solemnly promised aid to those left homeless.

He later apologized for the gaffe, which contributed to a steep drop in his rating in surveys that asked who voters would favor if they could elect their chancellor directly.

In a Forsa institute poll published Tuesday, Laschet scored 15%, behind the Green party’s candidate, Annalena Baerbock, on 18% and SPD candidate Olaf Scholz on 21%.

The CDU/CSU bloc still leads the Greens by six percentage points on 26%, with the SPD third on 16%, according to the Forsa poll for RTL/ntv.