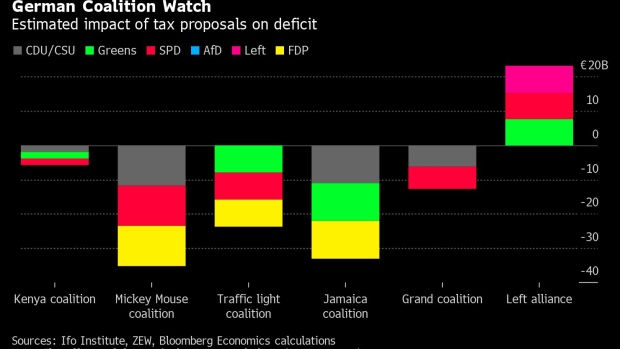 A coalition government between three left-leaning parties is the biggest concern for German businesses ahead of Sunday’s election, according to one of the nation’s most prominent economists.

An alliance between the Social Democrats, the Greens and the Left party may create uncertainty over Germany’s foreign policy, raise the tax burden and lead to more interventionist policies in areas like climate change, Ifo President Clemens Fuest told Bloomberg Television’s Francine Lacqua in an interview on Friday.

He spoke after Ifo’s business climate indicator showed confidence at a 5-month low, weighed down by stubborn supply bottlenecks that are cutting into production in Germany’s manufacturing sector.

“One issue is important, and that’s whether we have a majority on the left, so a majority of the Social Democrats, the Greens and the extreme Left party. That would probably give rise to a left-wing coalition and in that case there would be a significant shift of economic policy to the left, which is a concern for businesses. If there’s no such majority, it may take time until the government is formed, but whatever government emerges, if it’s a moderate government, there won’t be much volatility in economic policy so the outcome may not matter so much. I think the real difference is between a left coalition including the extreme left and the rest.” -- Ifo President Clemens Fuest

Neither the Social Democrats -- who are leading the polls -- nor the Greens have so far ruled out partnering with the anti-capitalist Left party, despite being pushed to do so by their conservative competitors. It’s one of a number of possible combinations that could emerge after Sunday’s poll in negotiations that could last for several months.

Follow the latest news on the the German election here

According to an analysis by Bloomberg Economics, the tax proposals of more right-leaning coalitions would lead to a more expansionary fiscal stance. The three left-leaning parties all favor higher levies on high-income households and large fortunes, while a government between them would also be more likely to try and circumvent the country’s debt brake to allow more public spending.

The potential introduction of a wealth tax would “significantly burden investment in Germany and lead to capital outflows,” Fuest said. “It’s not entirely clear it would be coming, but there are concerns about the tax burden.”