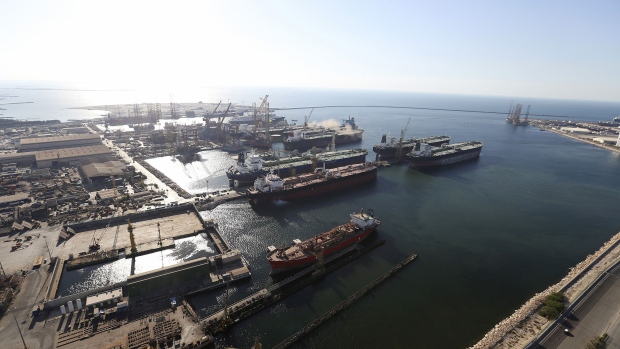 Oil tankers sit in the commercial harbor during shipping operations at Port Rashid in Dubai. Increased Iranian oil sales may further lower prices of crude, leaving the U.A.E. with a larger deficit to finance or needing to cut spending, said Khatija Haque, head of research for the Middle East and North Africa at Emirates NBD PJSC, Dubai’s biggest bank. , Bloomberg

(Bloomberg) -- The United Arab Emirates is poised to help keep diesel flowing into Europe’s largest economy when Russian supplies are cut off early next year.

Wilhelm Hoyer GmbH & Co. KG will receive as much as 250,000 tons of diesel a month in 2023 from Abu Dhabi National Oil Co. That’s equivalent to about two-thirds of all the seaborne diesel-type fuel imports Germany received from Russia last year, according to Bloomberg calculations from Vortexa Ltd. data.

Russia is by far the single-biggest external supplier of diesel to both Germany and the continent as a whole -- even amid heightened tensions with the European Union following its invasion of Ukraine. That’s set to change in early February when the EU’s ban on seaborne imports of the fuel kicks in, forcing oil traders to source barrels from elsewhere.

The Middle East already ships large quantities of diesel to Europe, and the ramp-up of two giant new refineries -- the Al-Zour plant in Kuwait and the Jazan refinery in Saudi Arabia -- could significantly add to these flows.

While Adnoc’s trading arm could source the fuel from the wider diesel market, it’s most likely that the volumes would come from the company’s Ruwais refinery or the wider Middle East, given the region’s structural oversupply and proximity to Europe, according to Williams.

The first delivery of the new supply deal is already taking place, with a 33,000 ton cargo of diesel currently being unloaded in Hamburg, Hoyer said in a statement on Sunday. Further talks to expand the joint cooperation will soon take place, it said.