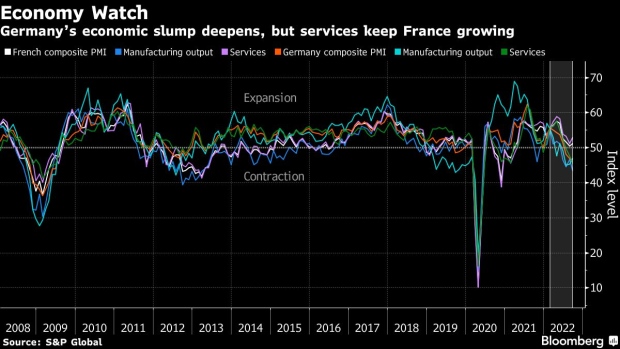 An employee works on the body of a Volkswagen AG (VW) ID.5 electric sports utility vehicle (eSUV) on the assembly line during a media tour of the automaker's electric automobile factory in Zwickau, Germany, on Thursday, Jan. 27, 2020. On Dec. 9, Chief Executive Officer Herbert Diess, delivered his largest plan yet for electrification, allocating 89 billion euros ($100 billion) to EV and software development over the next half decade. Photographer: Krisztian Bocsi/Bloomberg , Bloomberg

(Bloomberg) -- Germany’s economic slump deepened as demand for goods and services deteriorated rapidly on the back of surging energy costs and an increasingly uncertain outlook.

A gauge of private-sector activity by S&P Global fell in September to the lowest level since May 2020 as inflationary pressure intensified. Business surveys showed service-sector costs rising at an especially fast clip, leading firms to raise their prices more quickly.

“The German economy looks set to contract in the third quarter,” S&P Global economist Phil Smith said Friday. With data showing a strengthening downturn this month and “the survey’s forward-looking indicators also deteriorating, the prospects for the fourth quarter are not looking good either.”

The poll feeds growing concerns over the economic prospects in the euro area, which is clouded by the fallout of Russia’s war in Ukraine and the curtailment of natural-gas shipments. Deutsche Bank economists this week said they expect a much deeper contraction than they forecast just two months ago.

France unexpectedly bucked the trend in September, with output remaining in expansionary territory thanks to a pickup in services. The manufacturing downturn accelerated, however, raising the risk that the euro zone’s second-biggest economy will also fall into a recession, S&P Global said.