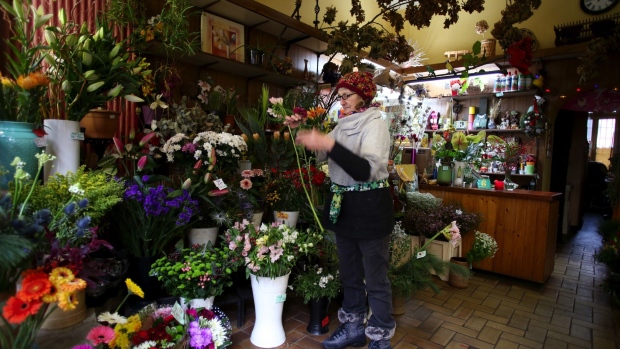 Anneliesse Kleinschimdt's flower shop in Berlin has lost at least 30% in revenue this year because of the coronavirus pandemic. , Bloomberg

Anneliese Kleinschmidt was gearing up for a brisk Christmas season, but now stands in a sea of roses, lilies and chrysanthemums that will perish if she can’t sell them by the end of Tuesday.

Her Blumenparadies flower shop in Berlin has already lost at least 30 per cent in revenue this year because of the coronavirus pandemic. Now, Germany’s decision to shutter most retailers from Wednesday as part of a hard lockdown means her store is one of thousands in Europe’s biggest economy that will be deprived of the lucrative holiday shopping period -- which in Germany traditionally includes pots of clover for good luck.

Germany’s latest curbs are set to hit output hard just as it started to recover from the first lockdown in the spring. Economists are already slashing forecasts, with Commerzbank now seeing a fourth-quarter drop of 1 per cent compared with the third quarter and Berenberg Bank predicting a contraction of 1.8 per cent.“Having to close over Christmas and New Year’s is very tough,” said Kleinschmidt, who has been running the store in the Kreuzberg district since the 1970s. “This lockdown comes as a total shock after an already difficult year.”

Germany is shuttering non-essential retailers until at least Jan. 10 and encouraging schools to extend holiday breaks. Companies from engineering giant Siemens AG to carmaker Volkswagen AG were asked to check whether they can close sites or have employees work from home.

Chancellor Angela Merkel hammered out the tighter curbs with state leaders on Sunday after a looser shutdown failed to halt a surge in infections and deaths. The decision gave affected business little opportunity to prepare.

The abrupt lockdown may hurt sectors beyond retail, such as automobile sales -- a key part of the German economy -- because customers won’t be able to benefit from a tax incentive that expires at the end of the year, said Claus Michelsen, an economist at the DIW thinktank.

“A lot of areas where we would have expected a strong year-end sales push will now be a lot weaker,” he said. “The economic impact is likely to persist well into the first quarter.”

The first lockdown, which hit second-quarter activity, caused the biggest contraction in the German economy in at least half a century. At the time, companies from BMW AG to Thyssenkrupp AG shuttered factories, and hundreds of thousands of workers were sent home on state-funded wage support. Deutsche Lufthansa AG avoided bankruptcy only thanks to a 9 billion-euro bailout -- among the largest in Europe.

Even so, the country is likely to suffer less than other European neighbors such as France, Italy and Spain, who have a greater reliance on services and tourism. Germany has benefited from its strong industrial focus during the crisis as factories adapted to health and safety rules.

In a bid to soften the blow to its economy, Germany is providing about 30 billion euros (US$36 billion) in emergency relief for businesses in November and December. A less-generous program that compensates for fixed expenses such as heating and rent has been expanded and extended until the end of June. The federal government estimates the hard lockdown will cost it around 11 billion euros a month.

Despite those safety nets, the curbs could knock consumer and business confidence at a critical time of the year, especially for Germany’s 620 billion-euro retail, hospitality and personal-services sector.

Amid the latest lockdown, more than half of inner-city shop owners -- which risk losing out to online retailers like Amazon.com Inc. and Zalando SE -- fear for the existence of their businesses, according to German retail lobby HDE. As many as 250,000 jobs are under threat if retailers don’t get additional financial aid, the group said.

After comfortably handling the initial wave of the pandemic, Germany is now lagging behind many of its neighbors. New cases and fatalities rose by record amounts in recent days, and more than 22,000 have died from the disease, which has infected a total of 1.35 million people in the country.

The latest numbers show that imposing a painful lockdown early is better than a series of softer stop-and-go measures, said Christian Odendahl, the Berlin-based chief economist of the Center for European Reform.

“Containing the virus effectively and in a timely fashion is what’s best for the economy in the medium run,” he said.

Riccardo Re, who runs an Italian restaurant in Kelsterbach near Frankfurt, said the government should have implementd a lockdown earlier to protect the key Christmas period and go after those businesses who caused outbreaks by breaking the rules.

In the past months, Re has reduced the number of tables and invested more than 3,000 euros in disinfectant dispensers, to-go boxes and takeout porcelain. Still, this year has been the most difficult in his 27 years as a restaurateur, he said.

“The government must also think about what’s next,” he said. “We need a perspective.”