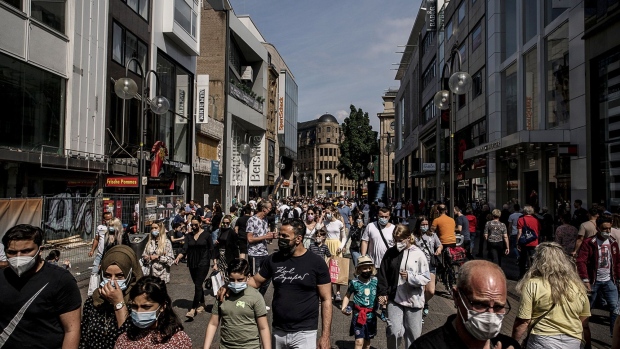 (Bloomberg) -- The German economy is on the verge of recovering the ground lost during the pandemic with a pickup in growth this quarter, according to the Bundesbank.

While the institution’s monthly report makes no mention of the floods that have devastated western parts of the country, a separate report by ING Groep N.V. says the impact to the country’s economy as a whole from the disaster is likely to be limited.

That’s because the floods in North Rhine-Westphalia, Germany’s most populous state, and neighboring Rhineland-Palatinate, have largely hit smaller, family-owned businesses rather than major industrial areas.

“The total economic impact should remain limited; even though the existential impact on the retail or hospitality sectors, which have already suffered enormously under the lockdowns should definitely not be underestimated,” ING’s Carsten Brzeski said in a note.

“The bitter irony of these kind of natural disasters often is that the rebuilding of homes and infrastructure could have a positive impact on GDP growth going forward.”

Finance Minister Olaf Scholz has promised emergency aid of at least 300 million euros ($354 million) to flood victims and a multi-billion-dollar program for reconstruction of damaged towns. The GDV insurers’ association fears storms, floods, heavy rain and hail in Germany could make this year one of the most damaging since 2013.

The Bundesbank report, published on Monday, predicts gross domestic product grew strongly in the second quarter and should expand even faster in the third.

Germany’s heavy focus on industry has helped the economy, Europe’s largest, to navigate the pandemic better than most of its tourism-dependent peers, which are only starting to catch up and already face new travel restrictions amid resurgent infections.

“Provided there won’t be any noteworthy setbacks in view of the pandemic, and supply bottlenecks in manufacturing ease at least gradually, the pace of economic expansion should be even faster in the summer, and real gross domestic product could already reach its pre-crisis level in the third quarter,” the Bundesbank said.

The European Commission predicts the 19-nation euro area will recover pandemic losses by the end of the year.