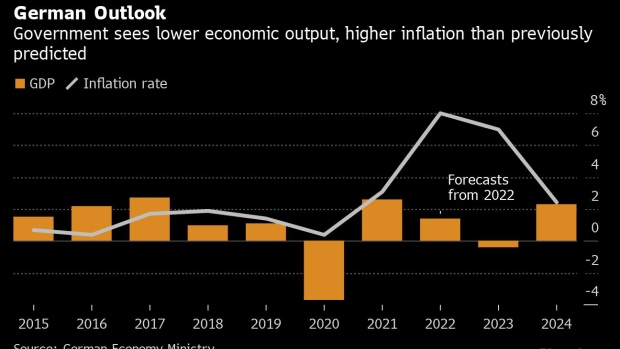 (Bloomberg) -- Europe’s energy crunch will likely trigger a contraction in the German economy next year for the third time since the financial crisis, according to updated government forecasts published on Wednesday.

Gross domestic product is set to shrink by 0.4% in 2023 as soaring power costs crimp industrial output and dampen consumer spending, the Economy Ministry predicted, slashing a forecast of 2.5% expansion made at the end of April. It also cut its growth projection for this year to 1.4% from 2.2%.

“These are serious times,” Economy Minister Robert Habeck said in an emailed statement. “We are experiencing a severe energy crisis that is increasingly developing into an economic and social crisis.”

The updated forecasts bring the government in Berlin into line with most other major institutions, which have also been forced to radically rethink their projections due to the ongoing impact of Russian President Vladimir Putin’s war on Ukraine.

The International Monetary Fund on Tuesday warned of a worsening global outlook and trimmed its prediction for growth next year to 2.7% from 2.9% seen in July.

The Washington-based fund said about one-third of the worldwide economy risks contracting next year, with the US, European Union and China all continuing to stall.

Germany is especially vulnerable to an energy shock having built up a heavy reliance on imports of Russian fossil fuels in recent decades. It last contracted in 2020 due to the impact of the coronavirus pandemic, and shrank in 2009 during the financial crisis.

“Germany cannot be satisfied with the way we are developing economically compared to other industrialized nations,” Finance Minister Christian Lindner told reporters Wednesday in Washington, where he’s attending the IMF and World Bank fall meetings.

“Others are coming through the crisis better,” he added. “This reflects our special energy dependency and our special international exposure as an industrialized nation.”

Habeck’s ministry also published adjusted forecasts for inflation, which it said take into account plans being drawn up by Chancellor Olaf Scholz’s ruling coalition to contain gas and power costs.

The government expects consumer prices to surge by 8% this year and 7% in 2023. It had previously predicted 6.1% and 2.8% respectively. The economy is expected to return to growth in 2024 with an expansion of 2.3%.

Industrial investment will likely decline next year, restricting growth potential and increasing the danger the country will be less competitive globally, it added.