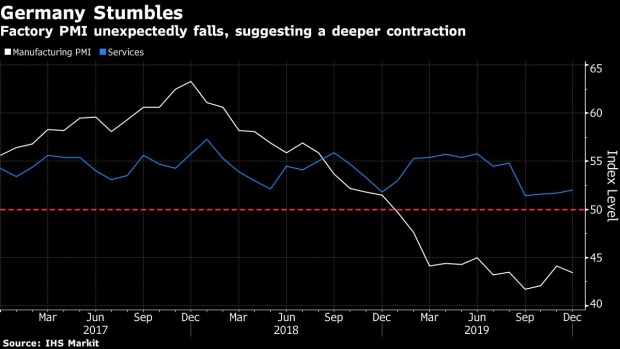 Just when German factories appeared to be exiting a year-long slump that battered the country’s economy, the sector’s contraction has worsened again.

IHS Markit’s Purchasing Managers’ Index for manufacturing unexpectedly fell to 43.4 in December, defying economists’ estimates that the number would pick up. The weakness more than offset growth in the services sector, keeping the private sector in contraction for a fourth straight month.

The data “point to a weak end to a difficult year for the German economy,” said Phil Smith, an economist at IHS Markit. “Manufacturing continues to weigh heavily on private sector output” even though slower declines in new orders and exports “provide glimmers of hope.”