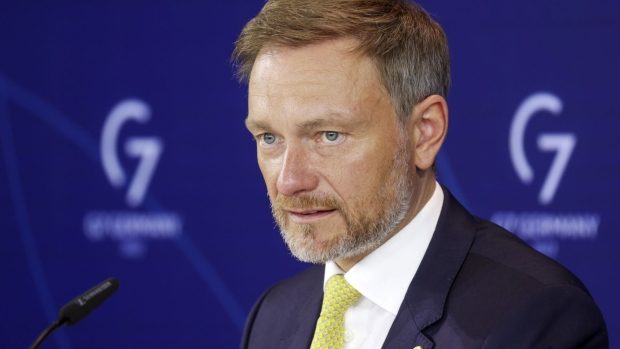 Christian Lindner, Germany's finance minister, during a news conference at the G-7 meeting of finance ministers and central bank governors in Bonn, Germany, on Friday, May 20, 2022. The Group of Seven unveiled a package worth more than $19 billion in short-term financial aid for Ukraine. , Bloomberg

(Bloomberg) -- German Finance Minister Christian Lindner said he will look at ways of exempting the country’s looming gas levy from sales tax in an effort to at least partially ease the burden on consumers from soaring energy costs.

Households will have to start paying the gas levy this October after utilities long pleaded to be able to pass along higher costs following Russia’s moves to squeeze deliveries. Consumers should not be encumbered even more by value-added tax, Lindner said Friday in a tweet.

“I will examine all legal and political options to exempt the gas levy from VAT,” he said.

According to website Check24, which compares prices of consumer goods, a single person could save about 50 euros a year if the gas levy was exempt from VAT, while a family would save about 200 euros ($203).

Lindner’s comments chime with remarks Friday from Economy Minister Robert Habeck, who told Der Tagesspiegel newspaper that charging VAT on the gas levy would be “wrong.”

“The surcharge is a difficult step, yet it’s needed to ensure the gas supply,” said Habeck. “But it shouldn’t be increased by a value-added tax.”