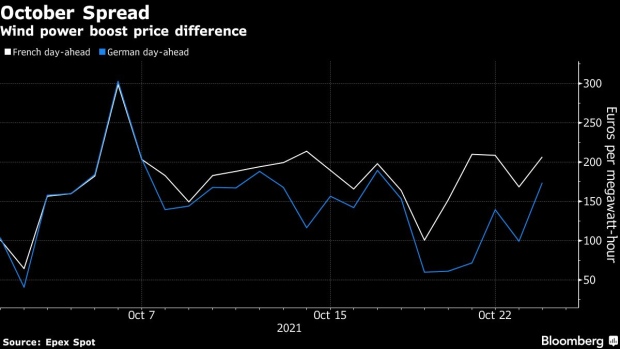 Gusty weather pushed down German-day ahead power prices well below French levels last week, as nations fleet of wind turbines showed that it at times can counter high fuel cost on the spot market. Traders expect this trend to continue this autumn and winter with power for next month in France trading at a 41 euro per megawatt-hour premium on Monday.

“In France there is loads of electrical heating, meaning that when it’s cold, demand goes very high. Much higher than in Germany,” said Emeric de Vigan, chief executive officer of analyst firm COR-e. “On the other hand, market knows there will be windy days in Germany, when prices will be low there”

French power for next month added as much as 3.2% to 230 euros per megawatt-hour on Monday, while German equivalent was little changed at 188 euros. Spread for first quarter of next year is was seen at almost 50 euros on Friday, with French contract yet to trade on Monday.

German contract for next year, rose as much as 2.2% to 125.20 euros, after losing 7.4% last week. It followed European benchmark prices for coal, gas and carbon, all rising on Monday.