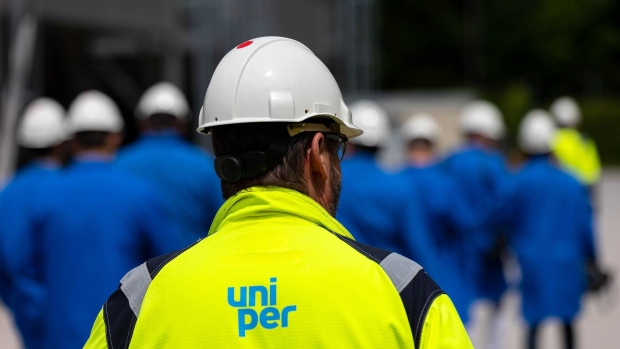 Employees and members during a tour of the Uniper SE Bierwang Natural Gas Storage Facility in Muhldorf, Germany, on Friday, June 10, 2022. Uniper is playing a key role in helping the government set up infrastructure to import liquified natural gas to offset Russian deliveries via pipelines. Photographer: Krisztian Bocsi/Bloomberg , Bloomberg

(Bloomberg) -- Uniper SE is nearing a bailout deal that may see the German government inject billions of euros and take a direct stake in the energy giant, according to people familiar with the matter.

The government may end up with a blocking stake of as much as 30% of Uniper, the people said, asking not to be identified because the information is private. It is discussing the purchase of equity-like hybrid securities in addition to buying common stock at a nominal value in a capital increase, they said.

Uniper and the German government have been locked in talks for weeks over a potential rescue package. The company has started unraveling since Russia’s invasion of Ukraine spurred a surge in energy prices, forcing it to buy large volumes of gas at higher prices in the spot market.

Uniper is also discussing the possibility of a fresh credit facility from state lender KfW. Details of the bailout could be discussed with Chancellor Olaf Scholz at a meeting Friday.

The company has been speaking to ratings agencies to get their views on the support package, the people said. Deliberations are ongoing, and terms of the potential bailout could change, they added. Spokespeople for Uniper and the German government declined to comment.

The exact size of the package will depend on the extent to which the German government allows gas companies to raise the prices they’re charging to consumers. Germany earlier this month adopted a law allowing firms to pass on a part of the costs, but no decision has been made on when it might come into effect.

Uniper’s largest shareholder, Finland’s Fortum Oyi, needs to approve the bailout. The parent firm would retain a majority but have its stake diluted from the current 78%.

Uniper became the first major corporate casualty of Moscow’s squeeze on European energy flows when it asked the German government for a bailout on July 8. Uniper has started using gas it was storing for the winter to supply its customers.

Efforts to keep Uniper afloat will reach a decisive phase in coming days. Maintenance work on Russia’s biggest pipeline to Europe is scheduled to end on Thursday. If gas imports are halted for longer it could intensify Uniper’s difficulties and add to urgency for the German government to hammer out a deal.

Gazprom PJSC is poised to restart gas exports through its Nord Stream pipeline to Europe on Thursday at reduced capacity, people familiar with the matter said earlier Tuesday, and Uniper shares rose.