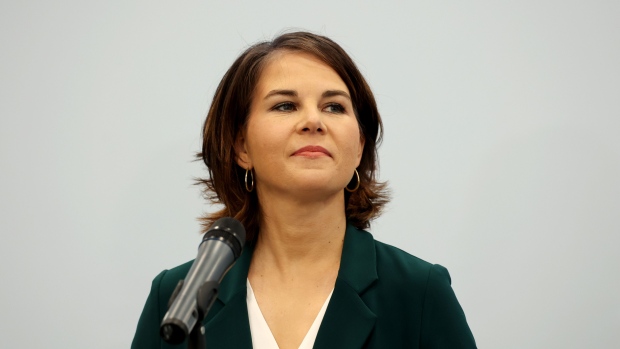 (Bloomberg) -- Germany’s Greens tapped their two co-leaders to run the foreign ministry and take charge of an influential portfolio overseeing economy and climate protection in the country’s next government under Social Democrat Olaf Scholz.

Annalena Baerbock, the party’s chancellor candidate for September’s general election and an outspoken China critic, will become Germany’s top diplomat, the first woman to hold the post. Robert Habeck gets the economy and climate job and will also be vice chancellor. The appointments were confirmed by Greens’ Secretary General Michael Kellner late Thursday in an emailed statement.

Scholz and his new three-party ruling alliance, which also includes the pro-business Free Democrats, sealed their coalition accord on Wednesday and are aiming to be sworn in by the lower house of parliament during the week starting Dec. 6.

Baerbock’s nomination as foreign minister has raised concerns in China that the new government will take a more critical line on human rights than the current administration under outgoing conservative Chancellor Angela Merkel.

The 40-year-old Baerbock has repeatedly criticized Beijing, and on Wednesday pledged a “return to a more active German foreign policy” which would be guided by “moral principles.”

China responded on Thursday with a warning against meddling in its internal affairs, hinting at potential damage to relations unless Berlin acknowledges its claim on Taiwan under the so-called one China policy.

“Past German administrations all upheld the one China policy, and we hope the new administration will keep to this policy, respect China’s core interest, and safeguard the political foundation for bilateral relations,” a Chinese Foreign Ministry spokesman said at a regular briefing.

The incoming coalition’s program for government includes surprisingly strong language on China, pledging to call it out on human rights, urging Beijing to loosen its grip on Hong Kong and committing to back Taiwan’s participation in international organizations.

“We are in a contest of political systems with authoritarian regimes and must do everything we can to defend the international rules-based order,” Baerbock said in an interview with Der Spiegel magazine published Friday. “It’s about protecting the principles of international law, human rights and international peace.”

She also accused the leader of Belarus, Alexander Lukashenko, of “blackmail” over his role in the migrant crisis at the European Union’s eastern border, and backed more sanctions against his government.

“We shouldn’t allow ourselves to be blackmailed by dictators,” she told Spiegel. “At the same time, diplomacy also means always looking for dialog.”

After resolving a dispute between the more pragmatic wing of the party and its radical left wing, the Greens also agreed on who will run the ministries for family, environment and agriculture.

The coalition accord and the cabinet appointments will be put to a digital vote among the party’s 125,000 members that will take about 10 days.