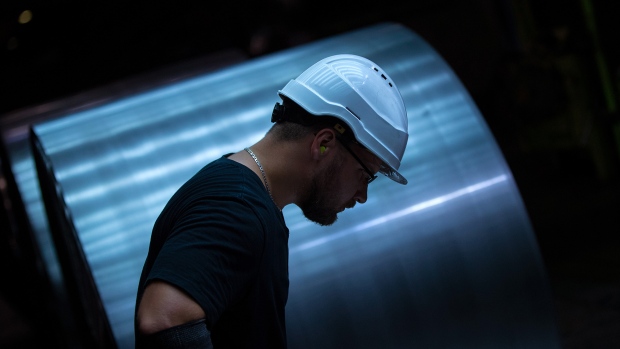 An employee inspects steel coils on the cold rolling line at the Thyssenkrupp Rasselstein GmbH steel packaging factory in Andernach, Germany, on Thursday, Aug. 9, 2018. Thyssenkrupp AG, which employs 60,000 people in Germany, is one of the world's largest steel producers. , Bloomberg

(Bloomberg) -- The Federation of German Industries (BDI) expects Germany’s economy to grow by 0.5 percent this year, half a percentage point lower than the industry group’s forecast in June.

And if Britain leaves the European Union at the end of October without a deal, Germany’s growth will fall to zero, the group said in its’ third quarter report published Sunday.

“Germany’s economy will continue to lose steam until the end of the year,” BDI’s Director General Joachim Lang said in a statement. “Economic uncertainty remains high, because of global trade tensions and the U.K.’s exit from the EU.”

A technical recession in Germany is becoming “more likely,” after gross domestic production fell by 0.1 percent in the second quarter, the group said. The BDI manager has been urging the government to change its’ fiscal policy to kick start growth.

To contact the reporter on this story: Birgit Jennen in Berlin at bjennen1@bloomberg.net

To contact the editors responsible for this story: Ben Sills at bsills@bloomberg.net, Srinivasan Sivabalan