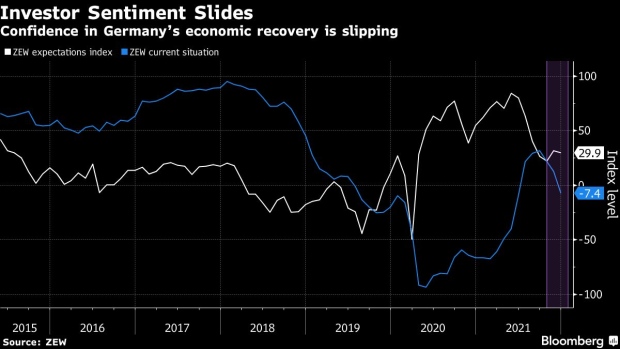 The ZEW institute’s gauge of expectations fell to 29.9 in December from 31.7 the previous month. An index of current conditions dropped to a six-month low of -7.4 -- worse than any economist surveyed by Bloomberg predicted.

“Persisting supply bottlenecks are weighing on production and retail trade,” ZEW President Achim Wambach said in a statement on Tuesday. “The decline in economic expectations shows that hopes for much stronger growth in the next six months are fading.”

The growth prospects for Europe’s largest economy have soured in recent weeks as record coronavirus infections threaten to overrun hospitals. In response, the government has tightened restrictions on people who aren’t fully vaccinated while trying to ramp up immunizations.

German manufacturers have been held back for months by global supply-chain problems. Underscoring the challenge, data on factory orders released Monday showed a slump that was far worse than any analyst predicted as foreign demand plunged.

On top of that, consumers are being squeezed by the fastest inflation since the early 1990s. Central bankers reckon it’ll slow next year, making monetary-policy action against a short-term spike unlikely.