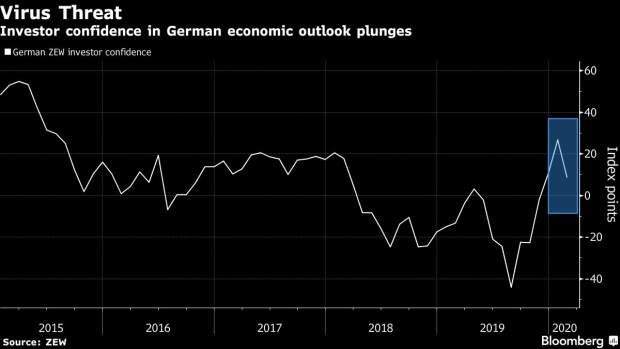 Investors have been plunged back into a gloomy mood over the German economy on concern the coronavirus outbreak in China will disrupt global trade.

ZEW’s index of expectations for the next six months decreased to 8.7 in February, below even the most pessimistic estimate in a Bloomberg survey. The poll suggests confidence is fading that Europe’s largest economy can stem a manufacturing recession that has lasted more than a year.

“Economic development is rather fragile at the moment,” ZEW President Achim Wambach said in a statement. The outlook for export-intensive sectors has deteriorated “particularly sharply” as a result of the epidemic, he said.

The Bundesbank said on Monday there are currently no signs that growth momentum in Europe’s largest economy will pick up in the current quarter after flatlining at the end of 2019.

It described the deadly virus as a “cyclical downside risk” for Germany and its companies, for whom China is an important market and an integral part of manufacturing supply chains. Still, domestic demand and construction should continue to support the economy for now, the Bundesbank said.

While this month’s survey didn’t feature a specific question on effects of the coronavirus, the Mannheim-based ZEW institute plans to ask about it next month. The survey took place from Feb. 10-17.