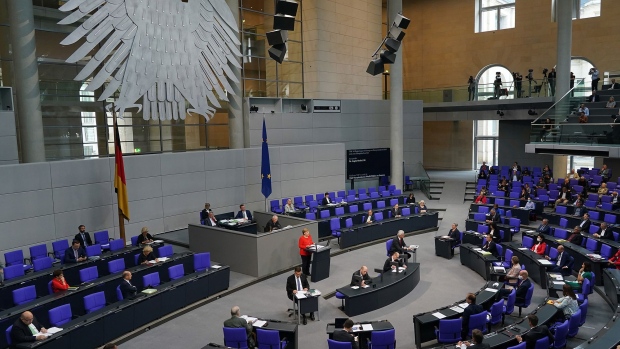 (Bloomberg) -- Chancellor Angela Merkel’s move to tighten protections for German companies from foreign takeovers is poised for final approval in parliament on Thursday, amid concern about potential acquisitions by firms bankrolled by China and other nations.

Economy Minister Peter Altmaier, a close Merkel ally, said the screening legislation is not meant to cut off investment coming into the European Union, but to help protect German companies that may be more vulnerable due to the fallout from the coronavirus.

The law, expected to pass with the ruling coalition’s majority in the Bundestag, will enable the government to block acquisitions that present “potential interference,” a lower threshold than previous rules that envisage a security threat. It also lowers the minimum for scrutinizing investments in the health-care sector. Deals involving a stake of at least 10% will be examined, compared with 25% previously.

“We still want foreign investment to come to Europe,” Altmaier said Thursday in an interview with RBB radio.

As well as shielding producers of drugs and protective gear, the new rules will also protect German companies active in the energy sector and the digital economy, Altmaier said last month.

Germany this week agreed to buy a 23% stake in CureVac AG, a player in the race for a coronavirus vaccine, as governments jockey to ensure a supply of any successful pandemic shot. The announcement comes after speculation flared up in March that the U.S. was angling to buy the company or its technology.

Germany’s move to tighten protections for its firms reflects a wider trend across Europe. EU Competition Commissioner Margrethe Vestager on Wednesday unveiled plans to bolster local industries in fighting back against mergers and acquisitions and unfair competition from rivals subsidized by foreign states.

The suggested curbs, which could be formalized in draft legislation next year, could eventually lead to a ban on some firms from making acquisitions, or force them to divest assets, and allow the European Commission to impose fines. They effectively extend Europe’s strict system of state-aid limits to businesses worldwide.