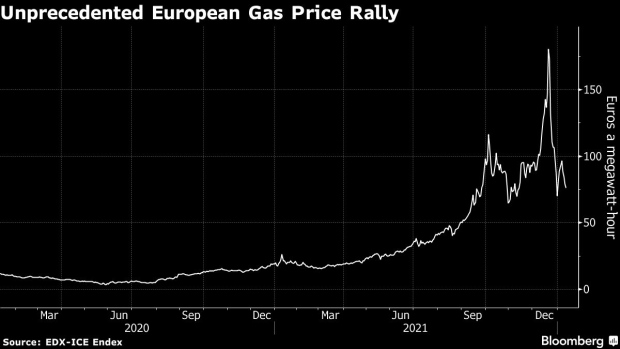 Hanseatic Energy Hub, the developer of the facility near Hamburg, decided to postpone a crucial step toward a final investment decision, said Danielle Stoves, commercial and regulatory director at the company. The firm had planned to offer transportation capacity to potential customers this month, but the key procedure has now been delayed until at least the summer.

The challenges faced by Hanseatic are a setback for Germany, which has been trying to reduce its reliance on Russian gas supplies. All of the country’s three proposed LNG terminals have faced headwinds, with the future of gas infrastructure projects yet to be decided by the new government in Berlin.

“It is not a good time to be asking people to take decisions now,” Stoves in an interview on Wednesday. “The energy price fluctuations also increase uncertainties and it is hard to say when things will settle down.”

Europe is grappling with an energy crunch, with gas prices more than tripling last year as Russia curbs supplies. The surge came after futures plunged in 2020 as the pandemic curbed energy demand. The extreme swings make it harder for customers who need a clear view on prices to make decisions, according to Stoves.

Hanseatic says a final investment decision set for the first quarter of next year may also be shifted. The company’s plan is to build an onshore storage and regasification unit with 12 billion cubic meters a year of capacity. The start of the terminal operations was scheduled for 2026.

“We are keeping our final investment decision date in review, because we still need to understand the impact of that delay in our plans,” she said.

The company also decided to delay the so-called binding open season to await “clarification of the future political framework conditions for gas infrastructure,” she said. The European Union is in the process of discussing a proposal that would consider some gas projects green, and the new German coalition is yet to rule on how it will support gas investments. The open season involves testing the market interest in buying transportation capacity.

Germany will need more gas in the years to come as it phases out nuclear and coal, but the outlook for LNG projects is increasingly cloudy. A key backer of the proposed Brunsbuettel terminal has written down its investment, while Uniper SE decided to ditch its plan for a floating terminal in Wilhelmshaven.

The delay in the process won’t affect the budget for Hanseatic’s project, and all shareholders remain committed, having participated in further funding recently, according to Stoves.

“The long term fundamentals are there – especially with the earlier German coal phase out,” she said.