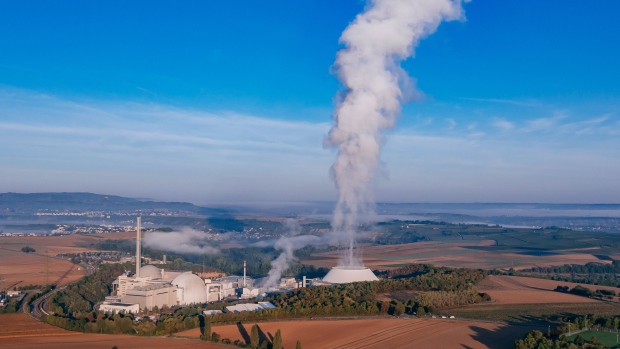 HEILBRONN, GERMANY - SEPTEMBER 12: In this aerial view, Neckarwestheim nuclear power plant (Kernkraftwerk Neckarwestheim) is seen on September 12, 2022 in Neckarwestheim, Germany. The plant is slated to cease operation by the end of the year but is now one of two that the German government is considering to allow to continue in reserve in order to help Germany through any possible energy production shortfalls this coming winter. Germany has been heavily dependent on energy imports from Russia, though consequences stemming from Russia's ongoing war in Ukraine have disrupted that supply, particularly natural gas. (Photo by Thomas Niedermueller/Getty Images) , Photographer: Thomas Niedermueller/Getty Images Europe

(Bloomberg) -- Germany said it will keep two nuclear plants in a reserve until April to help limit the threat of winter blackouts in Europe’s biggest economy.

Two out of three of Germany’s three remaining nuclear plants will be kept available if needed, a shift requiring a change in the law within weeks, Economy Minister Robert Habeck told reporters in Berlin. The government has been under intense pressure to delay the final phaseout after Russia’s invasion of Ukraine triggered a dramatic surge in energy prices.

Germany plans to make a final decision on whether EON SE’s Isar-2 and EnBW AG’s Neckarwestheim will be needed before December. It will be based on data from a stress test of the grid that takes into account the availability of France’s nuclear fleet, the reliability of which is worse than expected, Habeck said.

“We have agreed cornerstones which are basics for the legislation,” Habeck said. “These cornerstones and later on the law secure the availability of Neckarwestheim and Isar 2 after the end of their normal operations at the end of this year.”

German power prices for next year fell after the comments earlier that Germany would decide to extend these plants, reversing an earlier gain to close 1.5% lower at 470 euros per megawatt-hour.

Habeck stressed the difficulties with nuclear facilities in neighboring France -- which is normally a power exporter -- as one reason Germany may have to keep its reactors running to address a potential shortage in the south of the country.

The government said it won’t impose a windfall tax on profits made from running these units after December and will reimburse costs if the reserve isn’t needed.

Nuclear power accounted for 6% of electricity generation in Germany in the first quarter, compared with more than 30% from coal, 13% from gas and almost half from renewables including wind and solar, according to Federal Statistics Office data published in June.

Both plants are likely to require a short shutdown to prepare to extend operations. Isar-2 could run until early March and will undergo work next month in preparation, while Neckarwestheim-2 could stay in service until mid April.