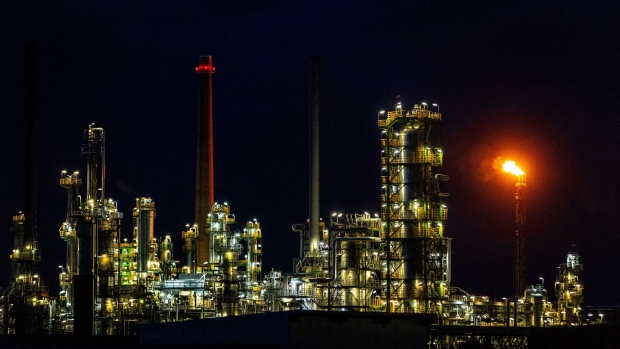 Flammable gases released from a flare stack at the PCK Schwedt oil refinery operated by PCK Raffinerie GmbH, a subsidiary of Rosneft Oil Co., in Schwedt, Germany, on Thursday, April 7, 2022. The PCK refinery, which handles Russian oil delivered via the Druzhba pipeline, supplies 95% of the gasoline, diesel, heating oil and kerosene to Berlin and Brandenburg. Photographer: Krisztian Bocsi/Bloomberg , Bloomberg

(Bloomberg) -- An oil refiner in Germany said it’s witnessing a “run” on supplies of heating oil and diesel, the latest sign of the stress that the country’s fuel market is under.

OMV Germany, which has a refinery in the south of the country, “is observing a current run on heating oil and diesel,” the company said in a statement. “This is possibly due to crisis-driven market shortages and thus excessive speculation and stockpiling.”

Southern Germany, Austria and Switzerland are grappling with curtailed supplies as the river Rhine -- a conduit for deliveries from the North Sea -- is on the brink of effectively closing to commercial traffic as scorching weather makes it too shallow to pass.

But even before that happens, barges are already having to sail with part cargoes.

OMV has stopped loading fuel onto trucks at two storage depots while its refinery at Burghausen near Munich returns from routine maintenance. The cessation will last until about Aug. 15.

“In order to secure supplies in the short and medium term, loading will now be temporarily suspended until the Burghausen refinery has resumed production,” OMV said in emailed response to questions.

South Germany, Austria and Switzerland have had fuel constraints for weeks following disruption in deliveries from refineries in the region. OMV said last week it has increased imports of fuels ten-fold via the river Danube.

There’s also been a pivot toward using oil to generate power with Munich using diesel-like fuel for that purpose as Russia pipes less natural gas into the country.

The Burghausen refinery has been undergoing maintenance in recent weeks and its Schwechat plant across the border in Austria is barely operating following an incident.

The company expects to lift the restrictions at Burghausen and Feldkirchen, the two storage sites, on about Aug. 15. The curbs don’t apply to jet fuel, OMV said.