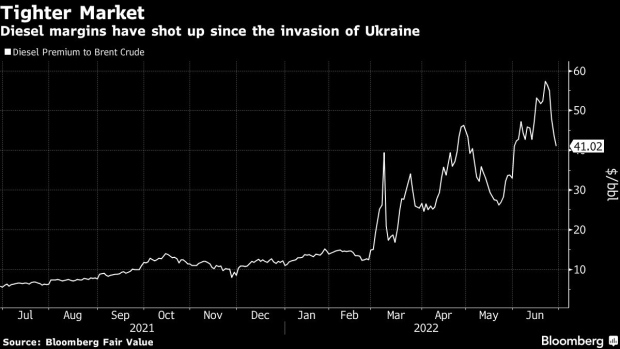 Fuel pumps at a TotalEnergies SE gas station in Berlin, Germany, on Tuesday, March 15, 2022. Germany's Finance Minister Christian Lindner and the FDP want to compel gas-station operators to cap pump prices and the government would then compensate them directly for the lost revenue, according to an FDP official who asked not to be identified discussing confidential information. , Bloomberg

(Bloomberg) -- Germany’s Bayernoil GmbH, which operates an oil refining complex in the south of the country, plans to halt deliveries of diesel and heating oil to customers from Thursday after a lightning strike, according to two people familiar with the matter.

The restrictions will be in place for several days and threaten to further tighten Europe’s diesel market, which is already reeling from the loss of Russian shipments.

The area supplied by Bayernoil has become particularly constrained in recent weeks, with the Burghausen refinery in southern Germany undergoing maintenance and the Schwechat plant outside Vienna hobbled after an incident at the start of this month. Trucks have had to wait in long queues for fuel at Bayernoil in recent days, one person said.

The Bayernoil complex comprises the Neustadt and Vohburg plants, and both are affected by the limits. The plant was hit by lightning, both people said, without being more specific. The two plants combined can process just over 200,000 barrels of crude a day, according to data compiled by Bloomberg.