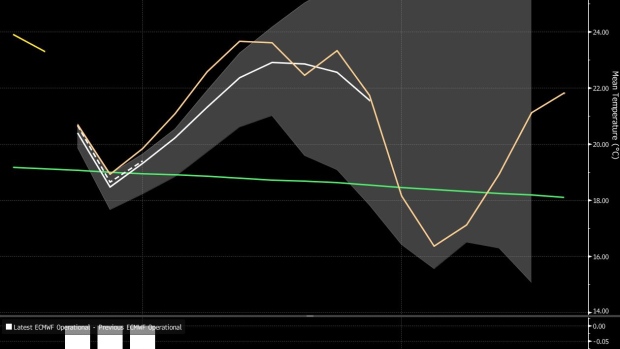 An employee monitors for gas leaks during safety checks at the Uniper SE Bierwang Natural Gas Storage Facility in Muhldorf, Germany, on Friday, June 10, 2022. Uniper is playing a key role in helping the government set up infrastructure to import liquified natural gas to offset Russian deliveries via pipelines. , Bloomberg

Next-year contracts in Germany and France, Europe’s biggest economies rose to new highs after Switzerland’s Axpo Holding AG announced curbs at one of its nuclear plants. Electricite de France SA is also reducing nuclear output because of cooling water restrictions, while Uniper SE in Germany is struggling to get enough coal up the river Rhine.

Europe is suffering its worst energy crunch in decades as gas cuts made by Russia in retaliation for sanctions drive a surge in prices. The extreme heat led to the driest July on record in France and is underscoring the impact that a warming climate is having on vital infrastructure.

Water levels on Germany’s Rhine have fallen so low that the river may effectively close soon, impacting supplies of coal to the plants next to it. The Rhone and Garonne in France and the Aare in Switzerland are all too warm to be used to cool nuclear plants effectively.

The German year-ahead contract gained as much as 2% to 413 euros a megawatt-hour on the European Energy Exchange AG. The French equivalent rose 1.9% to a record 535 euros. Long-term prices are coming under pressure because producing less power from nuclear and coal will increase the demand for natural gas, which is badly needed to fill storage sites ahead of the winter.

Uniper SE said on Thursday that two of its coal-fired stations along the Rhine may need to curb output during the next few weeks as transporting coal along the Rhine becomes impossible.

Plants on the river near Mannheim and Karlsruhe, operated by Grosskraftwerk Mannheim AG and EnBW AG, have previously struggled to source coal because of the shallow water. Both companies said generation hasn’t been affected yet.

“The low tide is not currently affecting our generation of energy because our plants do not have the need for continuous fresh water,” a Steag GmbH spokesman said on Friday. “But the low tide level can make running plants and transporting coal more complicated than usual.”

The spokesman said though that there is slight reduction in output of about 10 to 15 megawatts, which would equate to a few percent, because of the hot temperatures. “This has been happening over some time now and is a problem for everyone because the plant system is not designed to withstand such hot temperatures,” he said.