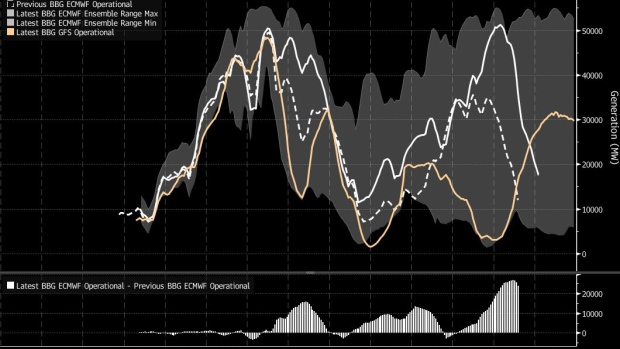 A gust of very windy weather in Germany toward the end of the week sent prices to their lowest level for a working day since the end of July.

Lower-than-normal generation from wind turbines has been a contributing factor to the energy crunch as it forces Germany and other countries to turn on more coal and gas plants. Output was down 8% last month from a year earlier and is so far lagging in October too.

German power for Thursday was trading at 54 euros per megawatt-hour via brokers. The benchmark year-ahead contract rose 0.9% to 133.50 euros.

Germany has added almost 1 gigawatt of wind capacity this year, according to data from Fraunhofer ISE. That means that when the gusty weather finally comes, there are more wind turbines installed to boost output, push out expensive fossil plants from the merit order and bring down power prices.