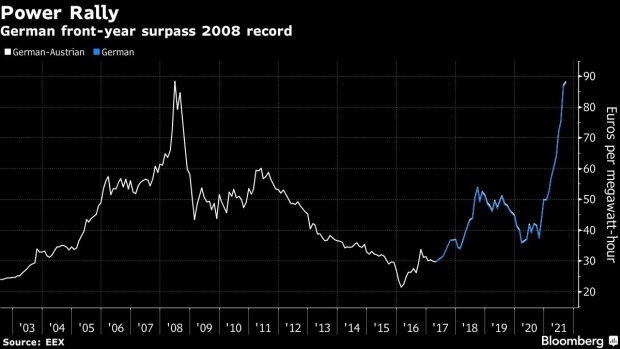 (Bloomberg) -- European power prices surged to a record, driven by the soaring costs of other energy commodities.

Global energy demand is picking up after the pandemic and a supply crunch in the gas market has made the power-generation fuel more expensive than ever. The rising costs are a pain for consumers and businesses just ahead of the winter heating season, while the higher prices will boost profits for utilities.

Analysts, including those at Bank of America Corp., don’t see the rally ending anytime soon. As Europe’s biggest power market leads the transition to a green economy based on solar and wind, the steady supplies from plants burning fossil fuels are on their way out. As much as 9,000 megawatts of capacity, the equivalent of about 9 nuclear reactors, will be decommissioned by 2023, the bank said Thursday in an note.

Germany Flirts With Power Crunch in Nuclear and Coal Exit

Next-year power in Germany, the regional benchmark, rose 1.2% on Monday to as high as 91 euros per megawatt-hour on European Energy Exchange AG. Gas prices have soared more than 170% this year, while carbon futures have almost doubled on ICE Endex.

Utilities across Europe are hiking prices at the same time as everything from food to transport costs are also rising.

“As the current strength in wholesale prices increasingly feeds through to retail tariffs in coming months there’s likely to be growing focus on the role of governments in mitigating the impacts of the rises in both the short and medium term,” said Glenn Rickson, head of European power analysis at S&P Global Platts in London.

The main winners from the record prices are renewable producers. They are not affected by rising fuel costs, but will get better paid because wholesale rates are tied to them. Among the losers are also industrial consumers, who are now provided an incentive to invest in their own solar and wind plants. The surging bills could also increase the pressure on the next German government to review taxes and subsidies, according to Rickson.