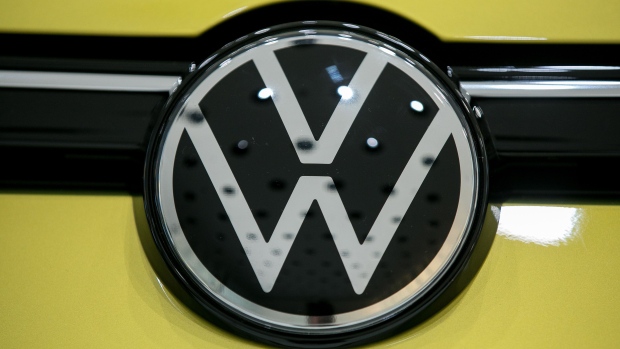 The updated Volkswagen AG (VW) badge sits on a VW Golf 8 hybrid automobile in a showroom at the automaker's headquarters in Wolfsburg, Germany, on Wednesday, Oct. 30, 2019. Volkswagen lowered its outlook for vehicle deliveries this year on a faster-than-expected decline in auto markets around the world amid economic jitters in Europe and an unprecedented slump in China. , Bloomberg

Volkswagen AG offices were raided by German prosecutors as part of a probe into diesel engines, marking a fresh setback for the manufacturer’s efforts to draw a line under an emission-tests cheating scandal that erupted four years ago.

The search was “directed against individual defendants” and related to diesel vehicles with EA288 engines, VW said Tuesday in a statement. VW “proactively disclosed the technical facts underlying the allegations to the responsible investigation authorities and registration authorities at an early stage” and “considers the public prosecutor’s legal opinion and the resulting investigations to be unfounded.”

Volkswagen admitted to U.S. authorities in September 2015 that it cheated on diesel emissions tests, triggering a crisis that has cost the world’s biggest automobile manufacturer about 30 billion euros ($33 billion) and counting.

To contact the reporters on this story: Christoph Rauwald in Frankfurt at crauwald@bloomberg.net;Birgit Jennen in Berlin at bjennen1@bloomberg.net

To contact the editor responsible for this story: Anthony Palazzo at apalazzo@bloomberg.net