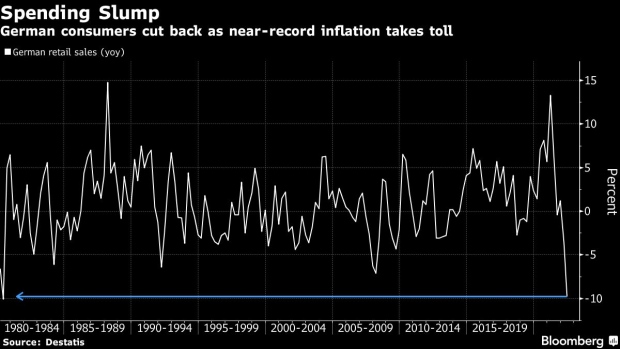 Sales were down 9.8% from the previous year, the most since 1980 -- before the country’s reunification. Non-food items such as furniture and household appliances or clothing and shoes registered even steeper declines.

The data add to an already strained outlook. Europe’s largest economy is suffering like few others from surging inflation as a result of Russia’s war in Ukraine, supply-chain disruptions and the prospect that energy rationing in the winter will shut down some of the country’s factories.

Output stagnated in the second quarter, and more and more economists argue that a recession later this year is inevitable. Inflation unexpectedly accelerated to 8.5% in June and is set to climb further in the coming months when temporary fuel-tax rebates and subsidized public-transport tickets expire.