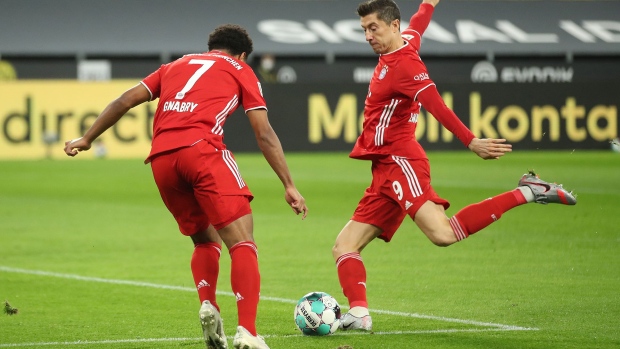 (Bloomberg) -- Germany’s elite soccer body will invite bids for a minority stake in its overseas media rights and private equity firms are circling, according to people familiar with the matter.

The DFL sporting organization could contact as many as 30 bidders interested in investing in Bundesliga International GmbH as soon as this week, the people said, asking not to be identified discussing confidential information.

The sale would channel much-needed revenue into a league that took a heavy blow when the Covid-19 pandemic emptied stadiums of fans. The Bundesliga is home to some of Europe’s biggest and best-supported clubs, including FC Bayern Munich and Borussia Dortmund, and star players including Robert Lewandowski and Erling Braut Haaland. Yet it lacks the international profile of rivals such as England’s Premier League.

Advent International and BC Partners are two private equity firms that have already reached out to Bundesliga International about acquiring a stake, Bloomberg News has reported previously. Other bidders could include Bain Capital, CVC Capital Partners, General Atlantic and KKR & Co., one person familiar with the matter said in November.

“There is sure to be a lot of interest,” said Doug Harmer, a partner at Oakwell Sports Advisory who is working with a potential bidder. “This is a well run league from a fiscal perspective, but you would ask whether more could be done to make it a more international product.”

The Bundesliga’s international broadcast rights were valued at 240 million euros ($292 million) per year by Deloitte, prior to the impact of Covid-19, compared with about 1.6 billion euros for the Premier League and 897 million euros for Spain’s La Liga.

A decision over whether to sell a stake in Bundesliga International​​​​​​, which manages media rights for the top two German soccer divisions, is part of a broader discussion over how the country’s professional clubs distribute shrinking television money. The Bundesliga’s domestic rights were recently sold at a discount to the last cycle, and in September DFL lost a 200 million-euro deal with Middle Eastern broadcaster BeIN Sports.

Meanwhile, private equity interest in soccer has been increasing. Last year, CVC, Advent and Italy’s FSI Fund agreed to pay 1.7 billion euros for a 10% stake in a new media company to manage the TV rights of Italy’s top league, Serie A. Concerns have since arisen about whether the deal will complete, with the league’s 20 clubs yet to agree to its terms.