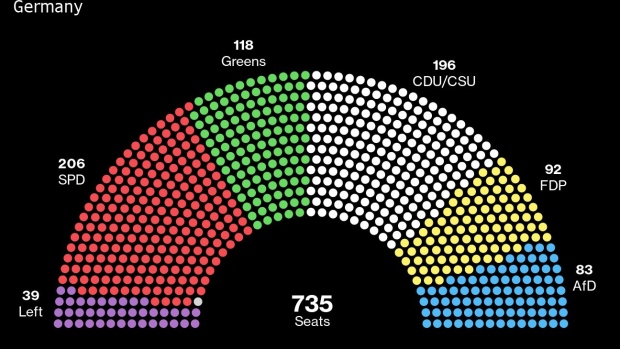 Annalena Baerbock, co-leader of the Green Party, Christian Lindner, leader of the Free Democratic Party (FDP), Robert Habeck, co-leader of the Green Party, and Olaf Scholz, Germany's finance minister and chancellor candidate for the Social Democratic Party (SPD), left to right, prepare to attend a statement to the media after exploratory coalition talks in Berlin, Germany, on Friday, Oct. 15, 2021. Scholz reached a milestone in his bid to succeed Angela Merkel as German chancellor by getting his potential partners close enough to enter formal negotiations for a coalition government. Photographer: Liesa Johannssen-Koppitz/Bloomberg , Photographer: Liesa Johannssen-Koppitz/Bloomberg

(Bloomberg) -- Germany’s Social Democrats and the Green party have raised the prospect of creating a debt-financed entity to back the climate agenda of a new government under Olaf Scholz.

A government-backed fund or state-owned company would provide an avenue to circumvent Germany’s constitutional debt restrictions, according to proposals from the parties floated ahead of the start of coalition negotiations later this week.

The plan could be a potential workaround that could raise billions of euros for fighting climate change while getting the Free Democrats on board. The pro-business FDP, who have agreed to seek a new three-way coalition government, has insisted that Germany stand by its so-called debt brake.

Norbert Walter-Borjans, a co-leader of Scholz’s SPD, said that while the constitutionally-embedded restrictions allow some scope to take on new debt, additional borrowing can be arranged through state institutions such as development banks, he told Funke newspaper group.

The Greens have floated a similar approach. Annalena Baerbock, the party’s co-leader, said a public-private company similar to state rail Deutsche Bahn AG or development bank KfW can provide a model for debt-financing outside the primary budget.

The SPD, Greens and FDP will begin comprehensive coalition talks this week after the parties approved a joint text reflecting their will to form a government. Negotiators will map out a detailed agenda addressing finances, energy, climate, immigration, foreign policy and the digital economy.

The FDP, which campaigned on a ticket of cutting taxes and tightening budgets, will have the most difficult path toward a government with the SPD and Greens, both of whom have called for ambitious spending. FDP leader Christian Lindner said the party sees an opportunity, “but we also see challenges,” he told reporters on Monday after his party approved talks.

A preliminary accord reached last week adopted the FDP’s rejection of new taxes and preservation of the debt brake, leaving open the financing of a costly climate agenda. The Greens have projected spending of about 500 billion euros over the next decade.