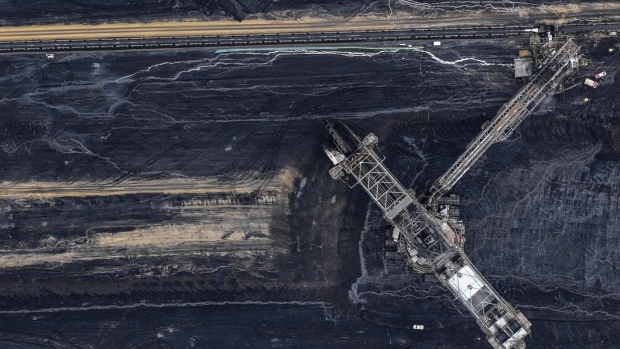 A bucket-wheel excavator at the Hambach open-cast lignite mine in Hambach, Germany, in April 2022. , Bloomberg

(Bloomberg) -- Germany’s biggest utilities are working to revive their coal operations as Europe’s biggest economy turns to the dirtier fuel in a bid to reduce the use of natural gas for electricity generation.

EnBW Energie Baden-Wuerttemberg AG is finalizing the procuring and transportation of coal, as also securing the space required to store the gas it saves, a spokeswoman said Thursday. RWE AG is preparing for the reactivation of three lignite mines which are currently on standby, the company’s spokeswoman said.

“We are dealing with the question of the workforce needed, since long-term personnel planning was based on the premises of the original phase-out of coal,” EnBW said.

European powerhouse Germany is in the middle of one of its biggest energy crises in recent times as Russia reduces gas supply through Nord Stream, the biggest pipeline to the region. The country enacted the second step of a three-phase gas-emergency plan, and is preparing for further cuts when Nord Stream halts for maintenance next month. That could prove a major setback for refilling inventories in time for winter.

Also read: Germany’s Gas Woes About to Get Worse as Pipeline Set to Stop

The government on Sunday unveiled a package of measures that included incentives for industry to reduce consumption and an offer of additional credit lines by state-owned lender KfW to guarantee gas injections into storage. A bill providing the legal basis for coal’s comeback is making its way though Parliament and should take effect after discussions in the upper house on July 8.

Still, the country could struggle in the winter when demand for power and heating typically peaks. Economy Minister Robert Habeck has said the drop in flows through Nord Stream makes it difficult to meet a target to have storage sites 90% full by November. Reserves are currently around 58% full.