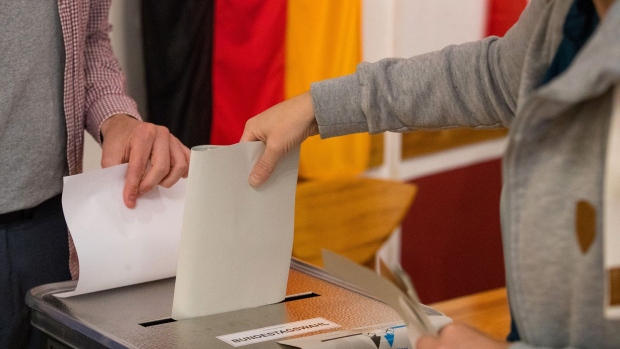 A voter casts his ballot at a polling station during federal parliamentary elections in Berlin, Germany, on Sunday, Sept. 26, 2021. German voters are heading to the polls Sunday in a watershed election to decide who will follow Angela Merkel as leader of Europe’s biggest economy. Photographer: Krisztian Bocsi/Bloomberg , Bloomberg

(Bloomberg) -- In-person voter turnout in Germany’s federal election stood at 36.5% at 2 p.m. on Sunday, trailing the participation rate recorded four years ago. In 2017, 41.4% of eligible voters had cast their vote at the same time.

The lower figure in comparison to 2017 is no surprise “because we expect a markedly higher share of postal voters,” Federal Returning Officer Georg Thiel said in a statement, adding postal voters’ “turnout will be calculated later when determining the final election result.”