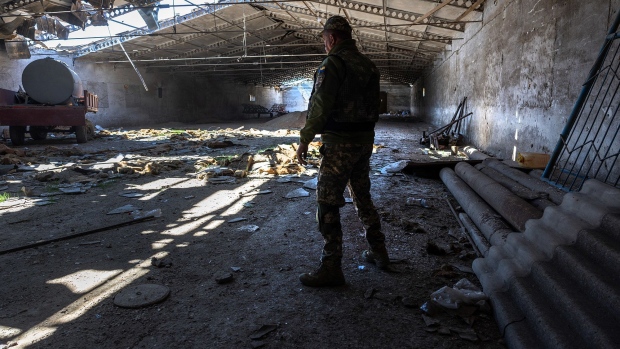 NOVOVORONTSOVKA, UKRAINE - MAY 06: A Ukrainian army officer inspects a grain warehouse earlier shelled by Russian forces on May 06, 2022 near the frontlines of Kherson Oblast in Novovorontsovka, Ukraine. Russia has been accused of targeting food storage sites in frontline areas and generally degrading Ukraine's wheat production, potentially causing a global shortage. The region's provincial capital, Kherson, fell to Russia shortly after the Feb. 24 invasion, as Russia sought to create a land bridge between the Crimean peninsula and the eastern Donbas region. (Photo by John Moore/Getty Images) , Photographer: John Moore/Getty Images Europe

Russia is destroying transport routes and storage facilities for Ukrainian grain, which is pushing up prices and threatening to unleash “brutal hunger” around the world, especially in Africa, Baerbock said at a news conference after talks with Group of Seven counterparts in northern Germany.

Ukraine is one of the world’s biggest growers of wheat and the US expects production to fall by one-third this year compared to last season. Baerbock added that about 25 million tons of grain are stuck at Ukrainian ports, particularly in Odesa, due to the Russian blockade and only a small amount can be transported out by train.

“We must not be naive about this,” Baerbock said. “It’s not collateral damage, it’s a perfectly deliberate instrument in a hybrid war that is currently being waged.”

Baerbock also condemned what she called Moscow’s “massive disinformation campaign” that she said sought to ”portray the aggressor as the victim.”

India this week joined other nations in prohibiting wheat exports in the face of global supply constraints sparked by the war in Ukraine.