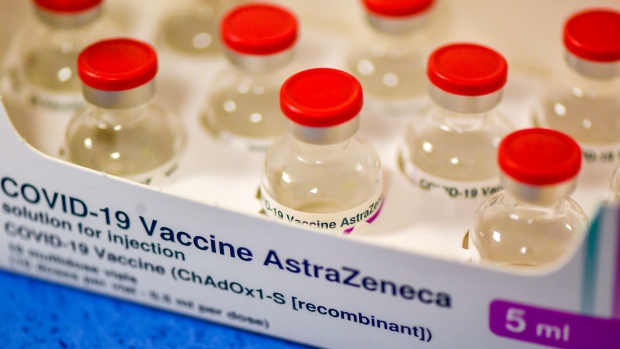 Vials of the AstraZeneca Plc and the University of Oxford Covid-19 vaccine at the Royal Health & Wellbeing Centre in Oldham, U.K., on Thursday, Jan. 21, 2021. Boris Johnson's government is pinning its hopes on a mass vaccination program to reduce hospitalizations and ultimately deaths, and aims to slowly lift restrictions from March to allow the economy to re-open. Photographer: Anthony Devlin/Bloomberg , Bloomberg

The German health ministry and AstraZeneca Plc denied a newspaper report on the efficacy of the U.K. drugmaker’s COVID shot that further inflamed tensions over vaccine supplies between the company and the European Union.

Business publication Handelsblatt, citing unidentified sources in Germany’s ruling coalition, said late Monday that AstraZeneca’s vaccine is only effective for 8 per cent of people older than 65. If true, that would be a massive blow for immunization campaigns across the world, given that older people are most vulnerable to the pandemic.

Germany’s health ministry rejected the report, saying that the newspaper appears to have confused the purported efficacy figure with the 8 per cent of test subjects who were between 56 and 69 years old in AstraZeneca’s trials.

“This does not result in an efficacy of only 8 per cent among seniors,” the ministry said in a statement.

An AstraZeneca spokesman called the report “completely incorrect,” while a representative for the University of Oxford, which jointly developed the shot, said “there is no basis for the claims of very low efficacy.”

AstraZeneca shares traded 1 per cent higher at 1 p.m. in London.

The U.K. has approved the vaccine, while European Union regulators are reviewing it this week. Governments around the world are counting on the Astra shot to battle the coronavirus.

A Handelsblatt representative said the paper is planning to update its article this afternoon, without providing details.