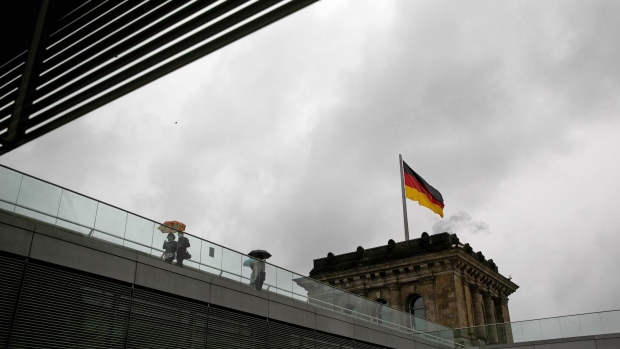 Visitors on a high walkway on the Bundestag parliament building, also known as the Reichstag, in Berlin, Germany, on Tuesday, Sept. 28, 2021. Olaf Scholz of the Social Democrats defeated Chancellor Angela Merkel’s conservatives in an unprecedentedly tight German election which is still to decide who will lead Europe’s biggest economy. Photographer: Krisztian Bocsi/Bloomberg , Bloomberg

(Bloomberg) -- Germany supports a plan to suspend European Union rules limiting deficits and debt by an additional year to the end of 2023, according to officials familiar with the government’s stance.

The European Commission, the EU’s executive arm, proposed on Monday to maintain the so-called general escape clause of the bloc’s Stability and Growth Pact until the end of next year due to the uncertain economic environment created by Russia’s war in Ukraine.

The German government will not stand in the way for the commission’s proposal to be passed and also won’t criticize the decision, said the officials, who asked not to be identified because the discussions are private.

Under the rules, which originally had been set aside until the end of this year due to the coronavirus pandemic, national deficits are limited to 3% of gross domestic product and public debt to 60% of output. The commission has the final say in extending the general escape clause.

Germany’s decision to back the commission’s proposal is a departure for the country, which in pre-pandemic times was among the most fiscally frugal nations in the bloc. Former German Finance Minister Wolfgang Schaeuble was derided in countries like Greece during the euro-area debt crisis for insisting on austerity measures in return for bailout money.

The three parties in Chancellor Olaf Scholz’s ruling coalition agreed that Germany itself will not make use of the proposed suspension of the EU’s fiscal rules, the officials said. Instead, the German government will return to the so-called debt brake in the constitution, which limits new borrowing to a fraction of economic output.

It will be difficult to bring Germany’s federal budget in line with national fiscal rules in 2023, said the officials. But the effort won’t jeopardize the government’s overall pledge to massively increase spending on defense and climate protection due to Berlin’s newly created, off-budget vehicles, including a debt-financed, 100 billion-euro ($107 billion) special fund to modernize the army as well as a 60 billion-euro fund to accelerate the green transition.